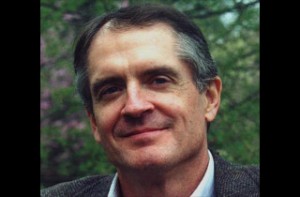 Jared Taylor, a prominent white supremacist, rhapsodized about the possibility of a Trump presidency, with an administration stacked with “people who think like us.”

Taylor is founder and editor of American Renaissance, a monthly publication “which promotes pseudo-scientific studies and research that purport to show the inferiority of blacks to whites,” according to the Southern Poverty Law Center.

“When blacks are left entirely to their own devices, Western civilization — any kind of civilization — disappears,” Taylor has said, responding specifically to the aftermath of Hurricane Katrina. He has also said, “We already know Blacks have lower IQs than Whites,” and suggested that “An obvious area of fruitful study would be to determine whether other biological indicators of crime are unevenly distributed among races.”

In a May 16 interview on the podcast This Alt-Right Life, flagged by the Hail to the Gynocracy, a watchdog blog that covers the alt-right movement, Taylor described how Trump’s ascendance “would be a radical transformation of the way America does politics when it comes to immigration, and that would be a wonderful thing.”

Specifically addressing his stated intentions to deport all non-citizens and institute a temporary ban on Muslims coming into the U.S., Taylor said:

And when people start thinking in those terms, Well, wait a minute, are Muslims really of any use to the United States? Then the next step, of course, is to say, Well, are there any other groups that are of no use to the United States? What do, oh, Guatemalans, for example, bring to our country? What do Somalis bring to our country? What do Haitians bring to America? Do we really need 30,000,000 Mexicans living in this country? When you start thinking in terms of group differences, then the camel’s nose is under the tent. That opens the door to all kinds, all kinds of anti-orthodox, subversive thinking. And so Donald Trump has played a huge role in breaking down the gates of orthodoxy and making it possible to raise these questions in a way that they’ve never been raised, at a level at which they’ve never been raised ever before.

Donald Trump is the only candidate in the last 50 years of whom I could realistically imagine his tossing off to a group of journalists a question such as, Well, what’s wrong with white people wanting to remain a majority in their own country? I can imagine him saying that. He will not necessarily, but I can imagine it. I cannot imagine any other candidate ever saying such a thing. I can even imagine him saying, Well you know, ultimately, you just can’t expect as many blacks per capita to be in the advanced placement courses because they’re just not as smart.

[…] If there actually is a Trump presidency, he will attract, at all sorts of levels in his administration, people who do think the way we do. Even though they’re not publicly associated with racial dissidents, or white advocacy. He will attract people who read our web pages, who listen to our podcasts, and they will work in all sorts of very, very useful ways in all levels of his administration to bring about sensible policies

“There will be a great number who will infiltrate his administration, his campaign, his advisers in ways that cannot but be extremely useful both to Trump and to us,” he said.