Who Is Kellyanne Conway?
video

Who Is Kellyanne Conway, the New(est) Campaign Manager For Donald Trump? 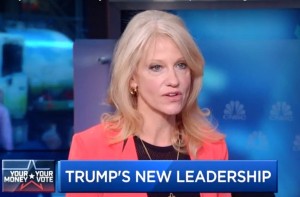 Just as we were all becoming such good friends with Donald Trump‘s first campaign Manager Corey Lewandowski, a switcheroo was pulled making Paul Manafort the new head honcho of the election effort. Then, last week after an avalanche of disastrous headlines linking Manafort to a slew of questionable business ventures in the Ukraine, he stepped down as Kellyanne Conway was named the newest campaign manager.

As of today, we have only 77 days until election Tuesday; only time will tell if Conway will be the campaign manager who will be standing in Trump Tower that night as the candidate gives his victory or concession speech, though for now it would appear as if she is calling the shots… at least, many of them.

Regular viewers of the cable news landscape will recognize Conway as a frequent CNN contributor this year before joining the Trump campaign last week. She is a self-described “Pollsteress,” having served as the President of The Polling Company/Women Trend since 1995.

Conway began her career in polling with a GOP polling firm called Wirthlin Group under legendary pollster Dick Wirthlin after law school before founding The Polling Company. Her chops in politics include a fair bit of campaign work as well; she advised the 2012 presidential campaign for former House Speaker Newt Gingrich, and eventually oversaw a pro-Ted Cruz super PAC last year.

Despite the fact that Conway and her husband have four children, one of the earliest reports out of the campaign last week was that Conway would be joining Trump on the plane as he travels from stop to stop.

According to the Washington Post, there is one key advantage that the hiring of Conway may bring to the tumultuous campaign; as WaPo’s Danielle Paquette wrote, “She built much of her nearly three-decade career around a persistently difficult task: helping conservative men win over female voters.”

She first met Trump in a venue far away from politics — in fact, it was in one of his buildings, where Conway was living with her family in 2006. “She said Trump seemed surprisingly hands-on, showing up at meetings to hear the residents’ concerns. She thought then he was much kinder than his public persona suggested,” WaPo writes.