Will The Right Make This Obama’s “Wise Latina” Moment?
VIDEO

Will The Right Make This Obama’s “Wise Latina” Moment? 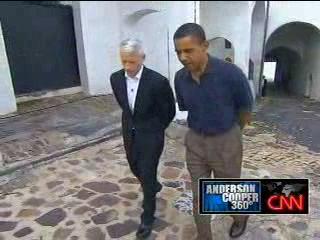 Over the weekend a tipster directed our attention to a part of the “President Obama’s African Journey” AC 360 special featuring the interviews Anderson Cooper conducted with President Barack Obama during his trip to Ghana.

One line of the President’s stood out as possible fodder for criticism in much the same way Judge Sonia Sotomayor‘s “wise Latina” comment became a conservative talking point.

Perhaps more importantly, will this become a “gotcha” moment? The quote could imply, at least without proper context, something similar to Sotomayor’s “wise Latina” comment. It could be the calm before the storm – it hasn’t even been a week since the interview first aired. So far it has been picked up only in the context of a discussion on the African American experience.

Whether the line becomes a conduit for a larger discussion on race in this country, or a talking point for the Obama detractors remains to be seen.

The interview is below, with the key passage starting around the 6:45 mark: