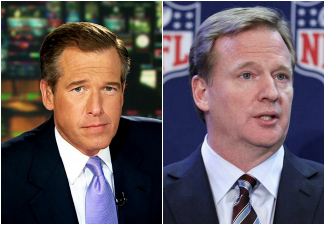 It’s all so clear now…

Both are men with one very powerful defense armor: Teflon. But in the case of both men, Teflon isn’t made of Teflon, but of money. And as noted in this space yesterday, Brian Williams survives without a scratch internally after not only a doozy of a lie, but even an apology that couldn’t even get the facts straight. Why? Because he’s #1 in an important timeslot and the face of the network in general.

Should one fabrication around being fired at in a helicopter in a 2003 Iraq war zone — the kind that has grown more with exaggeration over the years — cost a man his job at a network where he’s worked for 22 years and served as its lead anchor for the past ten? That all depends on who you talk to (Mediaite readers overwhelming say yes by a 70-30 margin, for example). Longtime media critic David Zurawik of the Baltimore Sun — a straight shooter without a filter — predicted Williams would be history by tonight. Zurawik’s logic was roughly the same as mine, but only if assuming NBC News President Deborah Turness placed credibility over profit, as we both wrote that it would be impossible for anyone to take Williams seriously anymore given the serious shot to his credibility. But again, that premise only works if Turness happened to be an old school network news president, which she apparently is anything but.

So as we’re hearing from all the silence out of 30 Rock, it turns out that Turness is about turning a profit more than anything else via her golden goose. And even if it turns out that her anchor also told some invalid truths about his reporting during Katrina, which included a claim about seeing a dead body float by his hotel in a French Quarter that remained largely dry, or that he somehow caught dysentery from drinking Katrina floodwaters, you still get the feeling that Turness can’t even fathom a Peacock planet without the likable Williams regardless of integrity issues.

Note: He’s #1 in his timeslot and has been for some time. Top dog in the nightly news race means big profits and helps set the table for primetime. The 55-year-old Williams has also hosted SNL and slow jams the news with Jimmy Fallon. He’s as much celebrity as news anchor… the anti-Scott Pelley.

There is no next-in-line behind Williams right now the way he was groomed behind Tom Brokaw for years much like Aaron Rodgers was playing backup for all of seasons to an aging Brett Favre. In the end, Turness is placing her bet on an apathetic public that doesn’t place the kind of trust in their news anchors the way they did with a Cronkite or Jennings, a Brokaw or Brinkley. Those men existed in another world, at least if the numbers are any indication.

Did you know that in 1976 (according to Gallup), 72 percent of Americans had trust and confidence in the media? In 2014, that percentage has dropped 32 points to an all-time low. Regardless, do you would think at least a suspension would be in order for Williams just to show a little backbone and set the tone for the rest of the news division moving forward? Of course not. In fact, it appears not even a public comment from Turness or any NBC exec is forthcoming. Hide until it goes away is the new mantra…

So Brian Williams skates because he’s a cash cow, but also because Americans aren’t surprised by this kind of thing by any public figure anymore.

He’s what Roger Goodell is to NFL owners: The reliable guy for the bottom line.