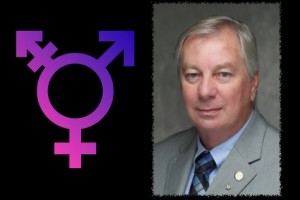 It’s no surprise that the ongoing conversation surrounding the transgendered community was brought to forefront in 2015 like never before, but that hasn’t stopped one Indiana state Senator from proposing some drastic steps as the debate continues.

State Senator Jim Tomes (can you guess his political party? Hint: it’s not Democratic) — last week proposed a bill that would slap a Class A misdemeanor on any transgendered person who used a bathroom not associated with that person’s gender at birth. Tomes said this week, “If you were born a man, then you are obliged to use the males’ restroom.”

Under a Class A misdeamnor, those found guilty could face upwards of a year in prison and as much as a $5,000 fine for using the bathroom opposite of the person’s birth-gender. The Chicago Tribune notes that, “Exceptions are made for janitors, first aid providers and parents accompanying children under the age of 8.”

Although reports indicate that students would not be slapped with criminal charges, “[t]he measure would also require public schools, including charters, to ensure students do the same.”

For those of you keeping score at home in the how-does-Indiana-stack-up-on-the-fight-for-equality game, state Governor Mike Pence worked himself into hot water last Spring for the controversial Religious Freedom Restoration Act. Pence had to backtrack and offer clarifying language to the bill, which resulted in a national conversation on discriminatory practices against the LGBT community and religious freedoms.

According to TPM, lawmakers have tried — and failed — to gain traction with similar legislation in states such as Florida and Nevada.

(And in case you were stumped from our quiz up above, Tomes is in fact a Republican.)