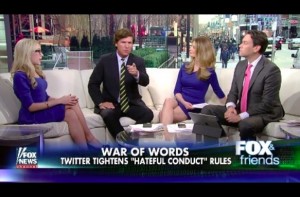 The promoted goals of the changes from the company are intended to target the social media practices of suspected terrorists who use the platform for communication; Timpf and her Fox cohorts aren’t so sold that others wouldn’t be silenced as well.

“The updated language emphasizes that Twitter will not tolerate behavior intended to harass, intimidate, or use fear to silence another user’s voice. As always, we embrace and encourage diverse opinions and beliefs — but we will continue to take action on accounts that cross the line into abuse.”

“People say horrible things!” said Timpf on the subject of people’s free speech on Twitter, but cautioned that the new changes could be used against viewpoints that run counter to mainstream liberalism.

Fox News’ Tucker Carlson agree, adding, “But people have been silenced, and it seems to me, a lot of them are conservatives!” He proceeded to share a pre-made graphic revealing various accounts that have been suspended on Twitter, including that belonging to the husband of radio host Dana Loesch.

Timpf continued her case, noting, “I don’t hear any liberals complain about getting banned on Twitter for something they’ve said and I hear every day about this happening to conservatives.”

As part of the new policy, Twitter continued, “You may not promote violence against or directly attack or threaten other people on the basis of race, ethnicity, national origin, sexual orientation, gender, gender identity, religious affiliation, age, disability, or disease.”

Watch the above video from Fox News.