Yes, Somehow Rep. Todd Akin Has Defenders In The Media

Yes, Somehow Rep. Todd Akin Has Defenders In The Media 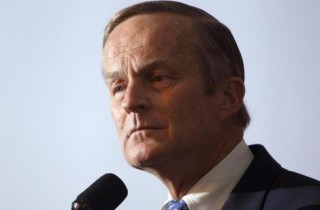 As previously reported, GOP Senate nominee Rep. Todd Akin would have been correct that “legitimate” rape does not result in pregnancy, if he had been talking about… ducks.

In all seriousness, however, Akin’s comments are rather reprehensible. His post-fallout statement that he had “misspoke” is just a poor attempt to save face. Apparently saying what you actually think is “misspeaking.” The statement shows that the congressman doesn’t actually deny that he meant the crazy biological “facts” he said with such certainty during the interview.

And yet some have managed to defend his idiotic pseudo-science. Politico reporter Dave Catanese took to Twitter to say:

“Poor phrasing, but if you watch the intv @ToddAkin meant to convey that there’s less chance of getting pregnant if raped”

“So perhaps some can agree that all rapes that are reported are not actually rapes? Or are we gonna really deny that for PC sake?”

Right. That’s likely true. But that’s not what Akin was saying. He was saying that real, bonafide rape doesn’t result in pregnancy because women have natural defenses that “shut the whole thing down” when rape occurs. Big difference.

“So looks like he meant to say — ‘If a woman was REALLY raped, it’s statistically less likely for her to get pregnant.’ What’s the science?”

Um, the science is that, according to the Centers for Disease Control, 32,000 women get impregnated through rape. Also, no, women do not have mechanisms to prevent pregnancy in the event of rape.

There are also a bunch of conservative bloggers who took to Twitter to participate in a whole other brand of idiocy. They didn’t necessarily defend Akin’s remarks, but rather used it as a chance to complain about how “the left” (read: anyone who disagrees with them) supposedly ignore the legitimate rapes that occurred at Occupy Wall Street encampments.

Wait — so the liberals who were silent when Bloomberg talked about women’s boobs and Harkin over their menses are mad now? Spare me.

And she wrote on Breitbart.com:

Progressive backlash from Roman Polanski fans and deniers of Occupy rapes was immediate.

Yes. So anyone who thinks Akin is a babbling idiot must be a progressive… and they must be fans of Polanski’s sexual assault… and they must be deniers of the cases of rape that occurred at Occupy protests. They couldn’t possibly be rational people from a variety of political persuasions. It’s just not possible!

The ridiculousness continued when Loesch, joined by RedState blogger Erick Erickson proceeded to turn the discussion into an overwrought “Well…well…McCaskill voted for ObamaCare, so she is, like, raping the whole country! That’s worse than Akin’s poor choice of words!”

Here’s Loesch’s version of that spin:

Akin failed a soundbite. McCaskill helped tank the economy. If you think his bad is worse, join the left.

And now we proceed to smack our foreheads against the nearest desks.

To be clear, ObamaCare does have some pretty destructive elements. Members of Congress should be held accountable for legislation that is tantamount to corporate welfare for insurance companies under the pretense of “health-care for all.”

But Erickson and Loesch are dead wrong: Akin’s words are not just some “stupid statement.” They reflect some seriously dangerous thinking. His point essentially boils down to this:

“Doctors” tell me that actual rape victims have natural ways of preventing pregnancy. Therefore, real rape victims do not need abortion rights because they wouldn’t be pregnant in the first place!

In other words, he would support legislation that would prevent rape victims from having the ability to seek abortion as a legal solution to being impregnated by a rapist… all based on some pseudo-science a “doctor” told him. To many people, that is a serious violation of personal liberty and choice.