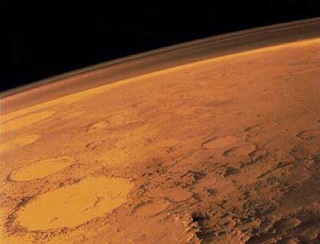 Did you know that some people believe that President Obama was part of a super-secret project that involved time-travel and visiting Mars to establish America’s “territorial sovereignty” in the 1980s? Of course you didn’t, you were too busy trying to find his real birth certificate. That’s what one wacky conspiracy theory website “uncovered,” except, unlike most wacky conspiracy theories, this one got the White House to confirm whether it is true. The short answer: um, no.

Posted on Wired today (and discovered by our sister site, Geekosystem), the magazine asked the White House for comment on the story, and, surprisingly, the press wing of the executive branch took the time to address the situation:

Officially, the White House says Obama never went to Mars. “Only if you count watching Marvin the Martian,” Tommy Vietor, the spokesman for the National Security Council, tells Danger Room. But that’s exactly what a secret chrononaut wants you to believe.

So what exactly is this conspiracy that somehow got eight words out of an NSC spokesman? It’s a doozy: two men alleging they works as “chrononauts” along with President Obama (then going under the name “Barry Soetoro”– does that one sound familiar from the birther conspiracy?) in a “CIA intergalactic program hosted at a California community college in 1980.” They assert that the President has been on Mars “at least twice.”

Obama wasn’t the only one making the otherworldly voyage. As “Barry Soetero,” the 19-year-old Obama was one of 10 youths selected to secretly teleport to and from Mars, forming a band of interplanetary Teen Titans. Regina Dugan, the director of Darpa, was another member.

Between 1981 and 1983, Obama is supposed to have visited Mars twice, by way of a teleportation chamber called a “jump room.” Basiago, a fellow chrononaut, told the website Exopolitics that he saw Obama “walk back to the jump room from across the Martian terrain.” To acknowledge his comrade, Obama is said to have told Basiago, “We’re here” — apparently, “with some sense of fatalism.”

Wired notes that “it is not known what exactly Obama did on Mars,” but that “the CIA wished to ‘establish a defense regime protecting the Earth from threats from space’ as well as a legal claim to “territorial sovereignty.'” While we were warned by people who know better (Geekosystem editors) to “not go too far down the rabbit hole,” we couldn’t help take a look at some of the other reports on “Exopolitics”: “Vancouver Futurist and former DARPA Time Traveler question de facto Mars truth embargo,” for example, or “Extraterrestrials in Israel.”

So, yes, this fake Mars conspiracy theory wouldn’t be much of a story at all on its own. But it is surprising how accessible and receptive the upper echelons of government can be when asked to disprove complete nonsense.