As The Hour Nears, The Mediaite Staff Presents Our Iowa Predictions

As The Hour Nears, The Mediaite Staff Presents Our Iowa Predictions 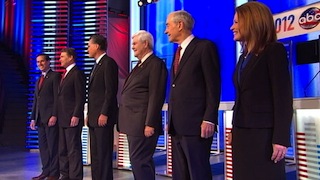 Throughout the past couple of days, the intrepid Mediaite staff has been sitting around, wallowing in sorrow, and weeping over the departure of our fearless leader. However, after regaining our composure, we got back to work and began thinking seriously about the many candidates America has to choose from in the 2012 election. We then promptly began crying again. But, after regaining our composure for a second time, we compiled this list of our predictions for tonight’s Iowa caucus results. Try to read them through your tears.

Yes, we here at the site have heard more about the great state of Iowa in the last month than that time we had a 24-hour Field of Dreams marathon and now we’re ready to put that knowledge to use. So sit down, buckle up, and get ready to mock those of us who get it wrong. It should be fun for everyone.

I think Rick Santorum pulls an upset, followed by Ron Paul. I’m hoping that Rick Perry or Michele Bachmann can eke out a bronze (or a Herman Cain write-in?), but I think Mitt Romney will show. The media will continue to point out how meaningless Iowa is, even as they devote every ounce of resources to covering it.

Also, I think a little-known sleeper named Barack Obama will take down the Iowa Democratic caucuses. You heard it here first.

Forget about the winner here — the real fun is going to be watching Rick Perry finish in third place and turn some heads. Iowa relies on organization, and Perry has a lot of money to burn, which means he can afford to have a lot of supporters make passionate speeches in the various polling places. With 41% of the voters undecided, it might actually hold some sway. Add in the fact that the Rick Perry Iowans have gotten to know on the campaign trail is a lot less gaffe-y and far more personable than the one we’ve seen on the debates, and a Perry third-place finish may end up being talked about far more than whichever candidate wins.

Based on the Des Moines Register’s final poll, Nate Silver’s astute analysis on Chris Hayes this weekend, The Duggar’s conservative values magic touch and getting his media moment in the sun just at the right time, I predict Rick Santorum pulls off a miraculous win tonight.

Against the predictions of all mathematical formulas and InTrade’s overwhelming odds predicting his victory, I guesstimate Romney ekes out 3rd place.

I feel like voters in Iowa – and across the country, really – have been treating the current crop of candidates as contestants on a Survivor-like reality show, with each personality getting his or her moment in the spotlight before ultimately being chewed up and spat out. It could be anyone at this point, is what I’m saying. That said, Santorum is the candidate most recently in the spotlight, and he has delivered a consistent, socially conservative message to very socially conservative pockets of Iowa’s population. I could see him running away with this one. I think Ron Paul and Michele Bachmann could go toe-to-toe for the second and third place spots, as both have positioned themselves as DC outsiders speaking to and for those who view themselves as politically disenfranchised or ignored by “big government” types.

I predict that, after thoroughly vetting the GOP candidates, the Iowa constituants will, nearly unanimously, make a write in vote for ‘a Mulligan.’

Following that surprising victory, the big prediction I have is that Ron Paul won’t win. He will come in second or third and, following that, a large number of people in Washington will breathe a sigh of relief thinking, “Well, I guess we don’t need to talk about him anymore.” Then, after a month of solid exposure and discussion, Paul mentions in the media will plummet.

Several month ago, when Rick Perry was still a respected candidate for the Republican nomination and Rep. Ron Paul was but a distraction for the days when we just couldn’t stand to write a 17th post about Newt Gingrich, I predicted that the Iowa caucus would go to a Texan. I stand by that prediction– the caucuses are a tedious process that only the staunchest supporters of their candidates would endure, and no supporters are as fervent as the notoriously rabid Ron Paul crowds. Polls can only help us so much in determining their influence precisely because it is easier to answer who one’s favorite candidate is for a poll than actually participate in a caucus, and so the Romney support on that front is likely to be overrated. That said, it will be a close race between Mitt Romney and Rick Santorum for the silver, but as Romney has achieved his support by default, while Santorum has been to hundreds of events in the state and shaken enough hands to, for once, be a serious top-tier candidate, I give an edge to the latter. Supporting Romney by default is not a passionate enough reason to caucus for hours; supporting Santorum out of principle (particularly of a religious nature) is. I also expect Rick Perry to overperform at the expense of Rep. Michele Bachmann.

So, which one of us will be the wrongest? Only time will tell! In the meantime, cast your own vote below in our poll: