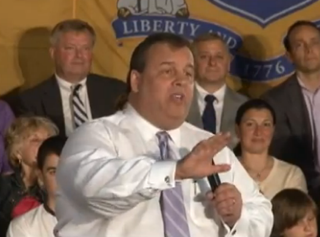 It may still be unclear whether Mitt Romney will call upon New Jersey Governor Chris Christie to be his Vice Presidential running mate, but if he does now, he’s going to have to get behind a young man in New Jersey who asked the question outright at a town hall earlier this week. “Before you endorse me and agree to be my Vice President,” the attendee asked, “I’d like to know if you have any advice?”

For all his boldness against town hall goers who challenge him, he only made sure to tell the young fellow to “hang out for a few years, give me a chance!” He also made clear that he was not giving any advice on how to become President of the United States– “I have no idea how to do that.” He then gave a few earnest bits of advice for how to be successful in his business, starting with: “make sure you believe in something first.” If you don’t he noted, “you will be a compromiser and not stand for anything… and the inn is full for those.”

Christie also said that “no job should be beneath you” when entering politics, because “no one gets into this business at the top, except for Jon Corzine.” Christie leaves the youth with one final thought: “make sure you’re there to do something, not be something.”