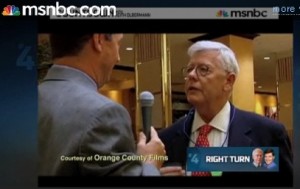 During his interview with ACU Chairman David Keene, John Ziegler name-checked Countdown host Keith Olbermann several times. On last night’s edition of Countdown, Olbermann returned the favor. He and Democratic strategist Chris Kofinis had themselves a good chuckle about the confrontation, with Kofinis calling the showdown a “good old conservative rat fight,” and Olbermann wondering if Ziegler was “defending his own crush.” In a Mediaite exclusive, Ziegler reacts by challenging Olbermann to a debate about the former Alaska Governor, and puts his money where his mouth is.

Check out the video, followed by Ziegler’s full reaction.

I contacted John Ziegler for a reaction to the piece, and this is what he had to say:

Wow. That is even more bizarre than I thought it would be.

First, if Olbermann really had ANY interest in knowing what motivated this (which he asks his not even tangential guest about several times) why didn’t he just ask me about it? If he was afraid I would destroy him in a live interview (which of course I would) why not do one on tape? If he didn’t want to give me the face time, why not at least speak to me off the air?

The real answer is that this had nothing to do with the Republican Party per se but rather a call for authenticity in the leadership of the conservative movement (those are different things). At one point Olbermann claims that I am motivated (bizarrely, moments after substantiating some of my other inquires of Keene) by “defending a crush.” For the record, my passion for defending Sarah Palin has nothing to do with any of her womanly qualities.

This may shock people, but my defense of her is not even politically based. It is motivated purely by the level of unfairness of the coverage of her. I honestly believe that I would have reacted the same way if she were ugly and a Democrat (not that it would have ever happened to her if that was the case), but I can understand why Olbermann couldn’t possibly understand such principled consistency or being motivated by something other than one’s own self interest and/or what they feel in their pants.

I will make this offer to Olbermann. If he has me on the show to debate Palin-related issues, live, for a full hour, I will pay his favorite charity $100,000, which is more than any profit I am ever likely to make from my film “Media Malpractice.” This offer is 100% real.

We’ve forwarded John’s offer to MSNBC, and are awaiting a response.