Trump Does Not Remotely Believe in Free Speech
Opinion

Our President Does Not Remotely Believe in Free Speech, And No One Seems to Give a Damn 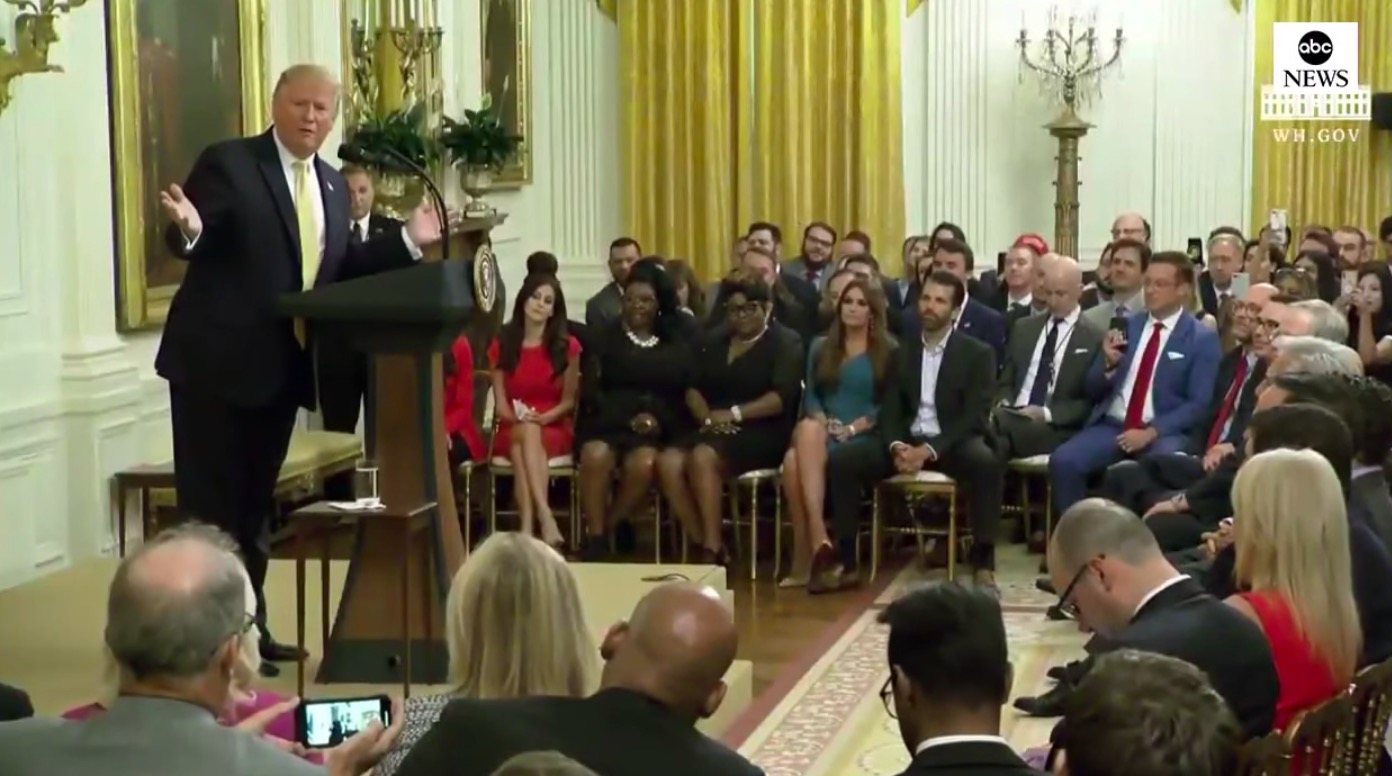 Yesterday, President Donald Trump greatly elevated some of social media’s sewer-dwellers by inviting them to the White House under the guise of combating corporate censorship of “conservative” content online. The real purpose was to reward those scam artists who have managed to become marginally “internet famous” by relentlessly praising his majesty, King Donald.

Not surprisingly, given the low-class nature of the invitation list, the event was a complete clusterfark.

But seemingly lost amidst the insanity of the affair’s atmospherics, was a statement made by Trump which, if it had been made by any other president in our modern history, would have resulted in a massive media firestorm, especially among the “conservative” elements of the press. Unfortunately, something which fits that description happens at least once a week in the Trump era, but this time it is unequivocally and frighteningly true.

While standing in front of a series of American flags and behind the presidential seal, Trump told the audience, “To me, free speech is not when you see something good and then you purposely write bad, to me that’s very dangerous speech, and you become angry at it. But that’s not free speech.”

While there is a lot of competition for this “honor,” that may very well be both the dumbest and most dangerous statement that Trump has ever made as president. The worst part may be that, given his many past statements about wanting to see a radical change in our libel laws and combating “Fake News!,” this was clearly not some sort of mistake or misunderstanding.

Nope. The president of the United States, a country so founded on the concept of free speech that it is the basis of the First Amendment to our Constitution, made it abundantly clear that he neither understands, nor remotely supports, this bedrock of our entire system.

As my seven-year old daughter could literally tell you, you cannot arbitrarily refuse to protect speech that says something “bad” about something “good,” because “good” and “bad” are obviously extremely subjective. Having the government, or any authoritative organization, determine what is “good” and “bad” is a recipe for tyranny, the escape of which is exactly why our country was founded in the first place.

Of course, what Trump is REALLY saying here is that saying “bad” things said about HIM should not be seen as “free speech,” but instead should be viewed as “dangerous speech.” This is exactly the lens through which a deranged megalomaniacal king or a dictator would view this issue.

Ironically, Trump was not only verbally urinating all over our Constitution, but also destroying his entire argument for the event itself. After all, under his view of “free speech” (the terms here get very dicey because there is a big difference between general “freedom of speech” and “free speech which is protected from government interference by the First Amendment”) Twitter and Facebook should feel liberated to not allow speech on their privately owned platforms that says “bad” things about a “good” thing, which would surely make their platforms even more liberally biased than they currently are.

In fact, Trump’s statement sounds an awful lot like the premise behind the entire left-wing-driven anti-free speech, pro-political correctness campaign that has overtaken so many of our college campuses. Had the president of the college said exactly the same thing, the “conservative” media, including many of those in Trump’s audience, would have gone bananas in the face of more evidence that our most precious constitutional right is under perilous attack from liberals.

Instead, there has been, sadly to the disbelief of no one, a deafening silence on the right in reaction to Trump’s outrageous declaration. Nothing on Twitter even from former Trump critic and conservative constitutionalist Glenn Beck. Nothing either from former Trump critic turned super-sell out Mark Levin who supposedly values this topic so much he is currently selling a book titled, Unfreedom of the Press.

As a former member of the conservative media industrial complex, which I wrongly thought was based in at least the principle of defending our freedom of speech at all costs, it is still stupefying, even after all the chaos of the last three years of the Trump coup, to see such staggering hypocrisy. This is especially so when it is all on behalf of a liberal conman who cares only about what he thinks at that moment is good for himself, and not a damn about conservative causes, or even the Republican Party.

I have feared for many years that we would eventually lose our freedom of speech in this country (I wrote a book called The Death of Free Speech way back in 2005), it is not that unexpected to see where this all seems to be headed now. What is shocking is that it appears to be facilitated and enabled by the very group of people which was best positioned to keep it from happening in the first place.