‘Don’t Book Liars’: Rachel Maddow Speaks Exclusively On Making of Her Show, The Competition, What’s Next in Post-Trump Era 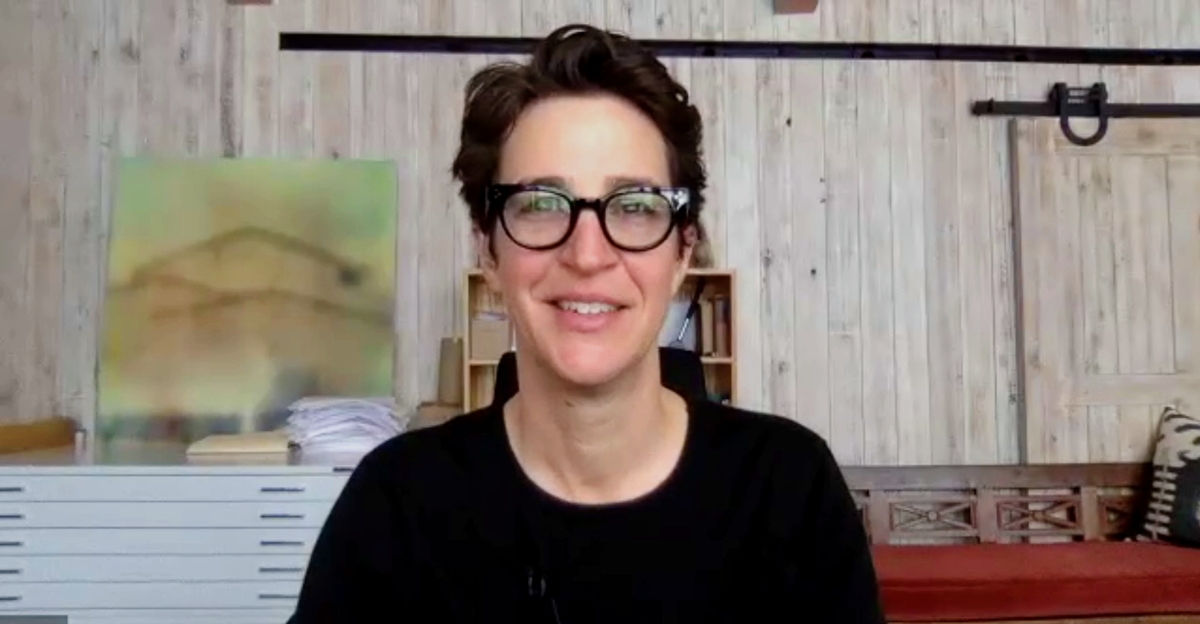 “We have this mantra on my show: Increase the amount of useful information in the world,” Rachel Maddow said of her MSNBC show, which has flourished as must-watch programming for liberals in the Trump era, in our exclusive interview.

But the program has a different formula than most of what you see on cable: “That means don’t book liars, don’t show fighting for the sake of fighting.”

The Rachel Maddow Show, which airs at 9 p.m. on MSNBC, averaged more than three million viewers a night in 2020, as her prodigiously loyal audience tuned in for her nightly take on the 2020 race and the subsequent chaos of the election.

Maddow’s success comes at a time of uncertainty for the cable news industry. President Donald Trump has dominated the news for the last five years, fueling a ratings boom for cable news networks suddenly thrust at the center of the biggest story in the world.

Now that the Trump administration is coming to a predictably chaotic close, cable news executives are concerned about what comes next.

Rachel Maddow — whom I spoke to Thursday for this week’s episode of The Interview — says doesn’t try to overthink it.

“I am humble in terms of what I can predict about audiences,” she told me. “But I’ve sort of learned that if you try to serve people what you think they want, you will fail. And so if you program your news show based on what you think is going to attract the most audience, you’re almost always wrong.”

“People are attracted to real news, told honestly from an authentic place by somebody who not only is interested in the thing they are talking about, but understands it well,” Maddow added. “You sort of can’t fake it.”

Maddow’s show carved out a position in the last four years as appointment viewing for liberals tormented by the Trump administration, but too enthralled to tune out. She broke MSNBC ratings records thanks to blanket coverage of the Russia investigation, and has resurged in the aftermath of Trump’s 2020 election loss; The Rachel Maddow Show is on track to end December as the most watched show on cable news, beating out Fox News prime time. Last night, her show drew 3.59 million total viewers and 550,000 in the 25-54 age demo.

While her show has thrived in the Trump era, it has done so thanks to a different formula than that of rivals on CNN and Fox News — or even of fellow hosts on MSNBC. Maddow rarely interviews conservatives or Trump supporters, eschewing a programming staple of hosts like CNN’s Chris Cuomo, who relishes a verbal boxing match with a Trump administration official.

“You make no material contribution to the thing you’re discussing except the fact that you’ve established that there are different opinions,” Maddow says of hosting two guests on either side of the aisle. “And then you watch them fight.”

“It doesn’t help. It’s heat and not light,” she continues. “I tend to almost always book one guest at a time. I feel like I have a sort of compact with my audience where if I’m putting somebody on the air, it is because I believe that they have something to tell you that you may not already know and that you can trust their take on it.”

Ms. Maddow doesn’t watch the competition either. When I asked what she thinks of Tucker Carlson, who used to host a show on MSNBC that had Maddow on as a guest at the start of her cable news career, Maddow starts with the disclaimer that she doesn’t watch his prime time Fox News show.

“I think the thing that Tucker gets a knock for — that he doesn’t deserve — is this idea that he’s evolved and changed in some radical new direction,” she said. “Tucker has always been that guy. He is legitimately that guy. He is not faking it. He comes by his beliefs and his convictions and even his tone of voice quite naturally, he is not putting it on.”

She adds that, thanks to Trump, the arguments that Carlson has been making for years are now being embraced by the Republican Party and its voters.

“A president got into office who articulated many of the most controversial things that Tucker has long advocated and that were most sort of hot in terms of riling people up and attracting controversy and attracting attention.”

Maddow is also out with a new book about Spiro Agnew, the often overlooked but comically corrupt vice president of Richard Nixon. Agnew, whose anti-media rhetoric closely mirrors Trump’s, was forced to resign in a corruption scandal. (His sin was unrelated to Watergate: Agnew was taking kickbacks from government contracts since his time as governor of Maryland. The bags of cash continued to flow into his office when he moved from Baltimore to Washington D.C.)

She draws parallels between “the way that Agnew talks versus the way that Trump talks, the targets that he picked, the deliberate outrage that he stoked, the way that he absolutely berated and tried to destroy the media while also using media attention as a superpower.”

The silver lining of the Agnew crisis, Maddow says, is that the system worked: Justice Department officials were not deterred in their investigation of Agnew, who ultimately resigned in disgrace.

“It’s the reason that I think the Trump era is more of a tragedy than the Agnew era,” she says.

Maddow’s book — Bag Man: The Wild Crimes, Audacious Cover-Up, and Spectacular Downfall of a Brazen Crook in the White House — was co-written with Mike Yarvitz and is based on their hit podcast of the same name. It is available now.

Listen to this week’s episode of The Interview on Apple Podcasts or Spotify.