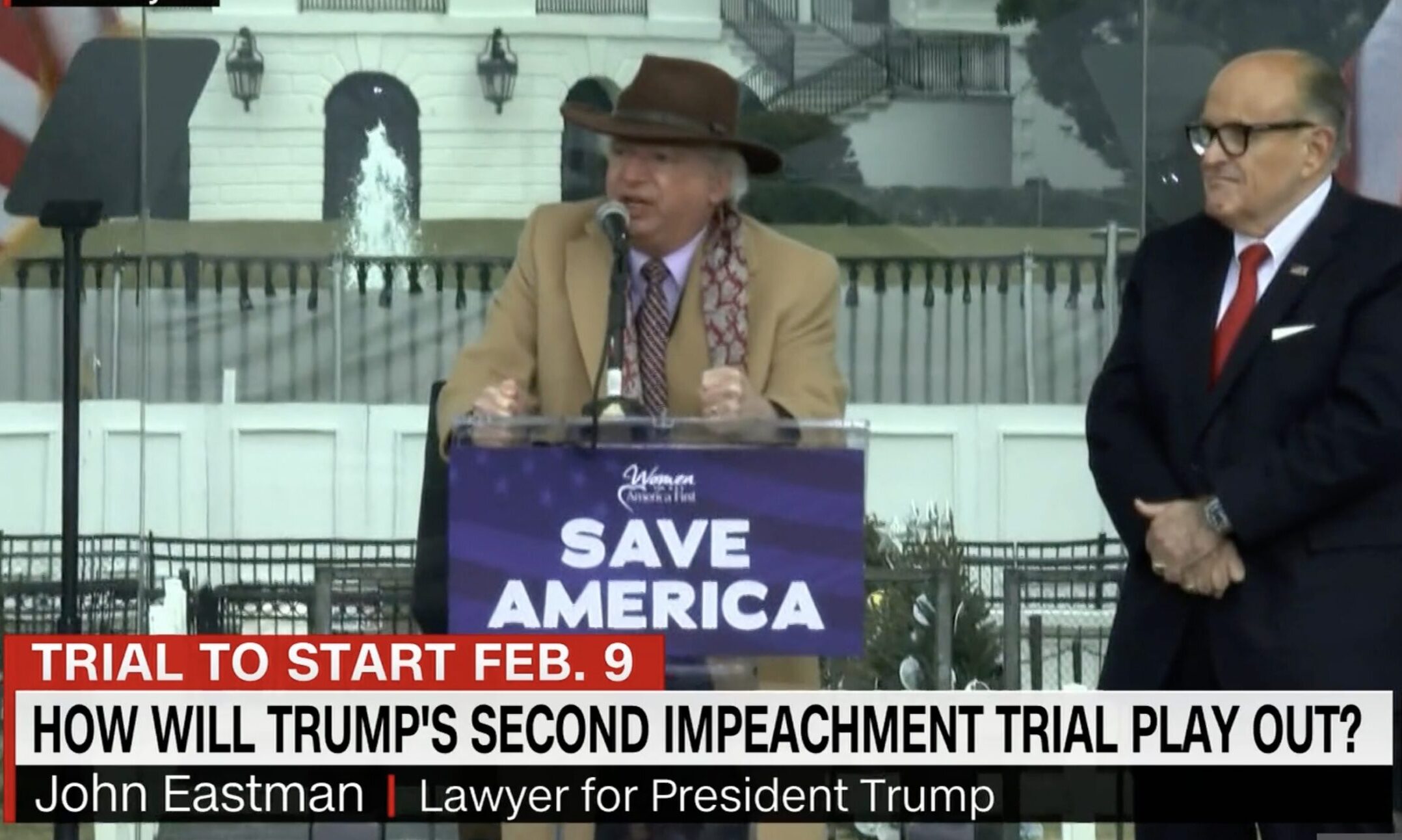 Conservative think-tank the Claremont Institute is getting pilloried for their statement on John Eastman’s six-point plan to overturn the 2020 election.

Eastman, a Claremont Institute scholar and lawyer for former President Donald Trump, made headlines last month as Bob Woodward and Robert Costa’s new book Peril revealed that he presented a six-point plan for former Vice President Mike Pence to overturn the election ahead of the scheduled electoral college count on Jan. 6.

The plan called for Pence to recognize multiple slates of electors in seven states when in reality, there was only one slate of electors in all 50 states.

“When he gets to Arizona, he announces that he has multiple slates of electors, and so is going to defer decision on that until finishing the other States,” Eastman wrote. “This would be the first break with the procedure set out in the Act.”

The legal memo essentially claimed Pence had the authority to reject electors from the states that Trump had lost, which he alleged would lead to Republican-led state legislatures appointing their own slates.

“The main thing here is that Pence should do this without asking for permission – either from a vote of the joint session or from the Court,” he later added. “Let the other side challenge his actions in court.”

Claremont Institute has now released a statement on the memo, defending Eastman while hitting at the previous reporting on his memo.

“Contrary to almost universally false news accounts, which have done great damage, John did not ask the Vice President, who was presiding over the Joint Session of Congress where electoral votes were to be counted on January 6, to ‘overturn’ the election or to decide the validity of electoral votes,” read the statement. “John advised the Vice President to accede to requests from state legislators to pause the proceedings of the Joint Session of Congress for 7 to 10 days, to give time to the state legislatures to assess whether the acknowledged illegal conduct by their state election officials had affected the results of the election.”

“If the state legislatures had found sufficient illegal conduct to have altered the results, and as a result submitted a second slate of electors, John advised the Vice President that, despite credible legal arguments to the contrary, the Vice President should regard Congress, not the Vice President, as having the authority to choose between the two slates,” added the statement.

Pundits on Twitter are now tearing the response apart, some joking that the think tank didn’t even bother to read the memo:

The scholars at the Claremont Institute don’t seem to have read John Eastman’s memo https://t.co/E4aaTn5d8W

That completely ignores the actual controversy. But also, he wrote a memo suggesting Pence could try that too.https://t.co/loQ1FRGWkM

#ELB: Claremont Institute, Lying About What John Eastman Proposed to Do In the 2020 Election (Have the VP Stage a Coup), Complains About Federalist Society Shutting Eastman Out of Annual Conference https://t.co/1u3VfoSRsh

Real fascism isn’t just trying to seize power, it’s lying to you that the power grab you saw didn’t happen. Pic 1 is what the Claremont Institute says John Eastman was advocating. Pic 2 is what he was actually advocating. https://t.co/VcSeb1teaW pic.twitter.com/fUyuoW8XGT

Read this entire thread for @claremontinst and then read the Eastman memo about exactly how they were planning to stage a coup and if you want to learn how to lie, cheat and undermine our democracy, applications are open at the Institute. https://t.co/IM607nK1K4

You read his memo, right? He advocated a six-step process to overturn the result of a free and fair election. How is that “disinformation”? https://t.co/Ysjbex8YY1

The purportedly “acknowledged illegal conduct” referenced here refers to voting procedures in various states, that were upheld by state and federal courts before the election, and that facilitated voting by Republicans and Democrats. https://t.co/fQJlHILwMI