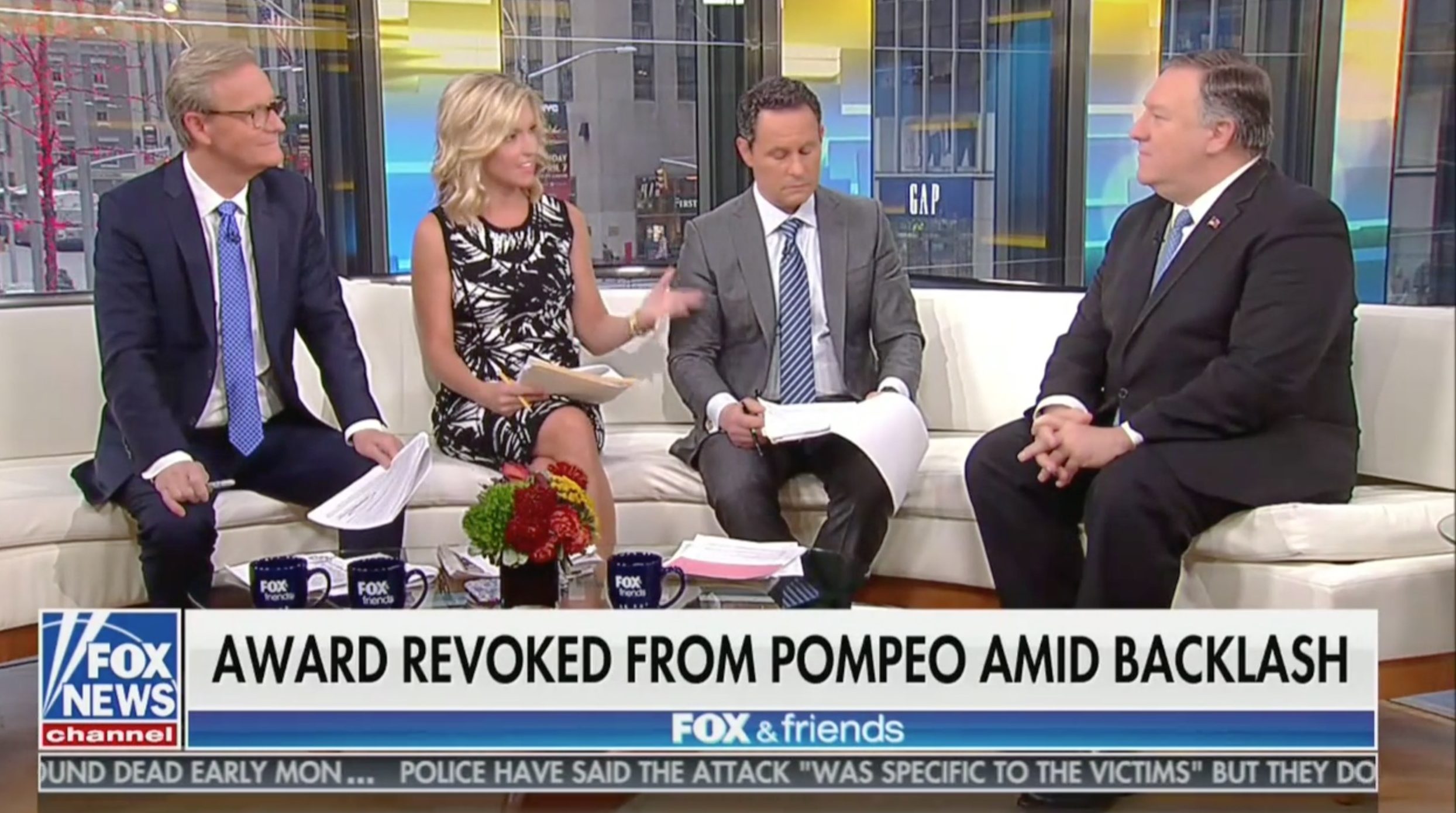 Mike Pompeo appeared on Fox & Friends Friday morning to complain that he had been disinvited from a dinner held by the James W. Foley Legacy Foundation, where he was set to receive the “Freedom Award.”

Pompeo blamed the media: “It sounds like some in the media, who are underwriting this event, sponsors for the event said, ‘If Pompeo’s there, we won’t be,’” he said. Fox & Friends host Ainsley Earhardt fretted that he was the victim of “bullying” by the hostage hostage rights foundation.

In a reported letter to James Foley’s mother Diane, Pompeo lamented the sad state of affairs:

How sad is it that base politics and hatred have been allowed to creep into even this sphere of our national activity? The safe recovery of Americans held hostage overseas should be beyond politics and must enjoy the support of all Americans. I regret that pressure of such a cynical and abominable nature was brought to bear on you and John.

The explanation Pompeo gave for his snub — “pressure” from the foundation’s “media partners” — is similar to reporting in an opinion piece by Washington Examiner columnist Paul Bedard, who claimed the “anti-Trump media” had “forced” the foundation to pull the award.

“Knowledgeable sources” told Bedard that “media partners” of the foundation “promised to boycott the event if Pompeo got the award, apparently distressed over giving the administration any credit” for its successes.

Bedard’s sources also claimed that CNN’s Christiane Amanpour, the keynote speaker at the dinner, was “was concerned about Pompeo getting the award.”

The opinion piece got picked up by Washington Post columnist Marc Thiessen, who touted the rescinded award as a demonstration of “Trump derangement syndrome” gone wild. He declared the situation “pathetic,” and concluded, “Our politics just hit a new low.” Friday morning, his Post column was re-printed on FoxNews.com.

Mediaite reached out to the James Foley Foundation for comment. They provided us with a statement explaining that the decision to disinvite Pompeo from the awards was made by the group, and based on the administration’s response to the murder of Jamal Khashoggi.

“[We] ultimately decided we could not present the award as planned due to the dramatic change in circumstances when the Administration did not press for genuine accountability from the Saudi government for the brutal murder of journalist Jamal Khashoggi,” the statement read, before thanking “Pompeo for his extraordinary efforts to bring Americans home.”

The January 11 decision with respect to the James W. Foley Hostage Advocate award is being mischaracterized by some media outlets. While it is accurate that our foundation intended to present our hostage freedom award to Secretary Pompeo until that date, we ultimately decided we could not present the award as planned due to the dramatic change in circumstances when the Administration did not press for genuine accountability from the Saudi government for the brutal murder of journalist Jamal Khashoggi. In addition to advocating for the safe return of American hostages abroad, the protection of free speech and promotion of journalists’ safety is a key pillar of our foundation and this award would have been in conflict with that key principle. We thank Secretary Pompeo for his extraordinary efforts to bring Americans home and are grateful for all that he and this administration have accomplished to prioritize the return of our citizens. In particular we are thankful for the time he dedicated to meeting with families of American hostages on Tuesday. We look forward to working closely with Secretary Pompeo and this administration on these efforts to bring Americans safely home.

It’s unclear whether the foundation told Pompeo that it was the administration’s handling of the Khashoggi murder that prompted the decision, as opposed to pressure from the anti-Trump media or Christiane Amanpour, as he suggested on Fox & Friends. The State Department did not respond to a request for comment.