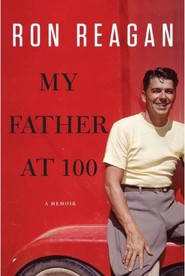 Former president Ronald Reagan‘s youngest son, Ron Reagan, reveals in an upcoming book – My Father at 100: A Memoir – that his father’ struggle with Alzheimer’s Disease may have begun while he was still in office. U.S. News & World Report‘s “Washington Whispers” blog, which reviews the book with a more than a bit of wariness, notes that the younger Reagan’s claims have previously been “dismissed by Reagan’s doctors and outside experts.”

Ron shares that, although his father was not diagnosed with the disease until 1994, five years after his presidency, he observed that he acted “confused” and like “an out-of-touch president” both during his 1984 campaign and once again in 1986, when the President had trouble recalling the names of California canyons. He writes:

Watching the first of his two debates with 1984 Democratic presidential nominee Walter Mondale, I began to experience the nausea of a bad dream coming true. At 73, Ronald Reagan would be the oldest president ever reelected. Some voters were beginning to imagine grandpa—who can never find his reading glasses—in charge of a bristling nuclear arsenal, and it was making them nervous. Worse, my father now seemed to be giving them legitimate reason for concern. My heart sank as he floundered his way through his responses, fumbling with his notes, uncharacteristically lost for words. He looked tired and bewildered.

Ron makes another controversial claim by asserting that his father underwent brain surgery after falling off a horse in Mexico six months after leaving the White House – a claim also denied by those who worked with the President. Ron writes that surgeons at a San Diego hospital opened his father’s skull to relieve pressure and then “emerged from the operating room with the news that they had detected what they took to be probable signs of Alzheimer’s disease.” He adds:

No formal diagnosis was given, as far as I know. I have since learned from a doctor who happened to be interning at the hospital when my father was brought in that surgeons involved in his care, in what my informant characterized as ‘shameful’ behavior, violated my father’s right to medical privacy by subsequently gossiping about his condition.

News reports from the time, however, indicate that Reagan was taken to a hospital in Arizona – not California – to treat scrapes and bruises he suffered after falling from the horse. Then, in September of that year, the President visited the Mayo Clinic to have a small hole drilled into his head in order to correct a fluid buildup as a result of his fall.

Ron Reagan, who had a strained relationship with his conservative, Church-going father after declaring himself an atheist (at age 12) and a liberal, is currently a political pundit for MSNBC and is a former talk radio host.