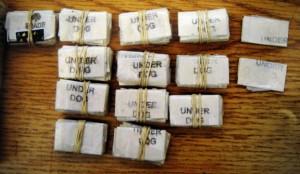 Maybe it’s something about the season, but hard drugs are in the air. This week, both the New York Observer and New York Press are running poignant features about the use of class A drugs — crack and heroin, respectively. Both pieces seem to serve as an epilogue to nearly three decades of governmental push against substance abuse, especially among the urban youth, but each niche cultural paper takes a different approach.

In the Observer, “The Last Crack Hipster” by Spencer Morgan tells the affecting story of an isolated man in the creative underclass — possibly the last vestige of a gritty scene including “graffiti artists, skaters, DJs, male models, slam poets, drug dealers, party promoters, T-shirt designers” — “lifestyle artists,” Morgan calls them. They embraced crack in the early 1990s as a “reaction to their parents’ nudge-nudge, upper-income-bracket embrace of cocaine” — rich kids with nothing better to do than fall into the vortex of an edgy death wish.

The Last Crack Hipster looks a bit like a raccoon, but not in a bad way. He’s a shower man, prefers the spray to the soak, has an iPhone and a serious girlfriend. Grew up out West. His parents aren’t millionaires, but if he’s in a tight spot, they’ll help him out. His apartment is littered with art books and kitty litter. A high-school doodler and onetime community college dabbler, he never lost the fascination with pop culture that ate his homework; his eyes are still wide.

The Press, meanwhile, has Matt Harvey, a self-professed former junkie, curious because of “a spate of recent media reports claiming that America—and especially the New York metro area—is suffering from a terrifying new heroin epidemic.” Just last month, the New York Times ran “Young and Suburban, and Falling for Heroin” while a recent issue of Newsday included “Heroin Hits Main Street.” Harvey decides to “revisit a world that had once held me in its clutches for so long. This time around, I brought along a notebook and a clear head.”

And so while the Observer sees crack ending in the young urban milieu — “All of this is ending, donzo” — Harvey isn’t so sure he buys the media obsession with a drug renaissance or decline. Elicit headlines and aggressive drug policies are equally exaggerated, he says. “The junkies are here to stay.”

Both pieces are well worth a read: