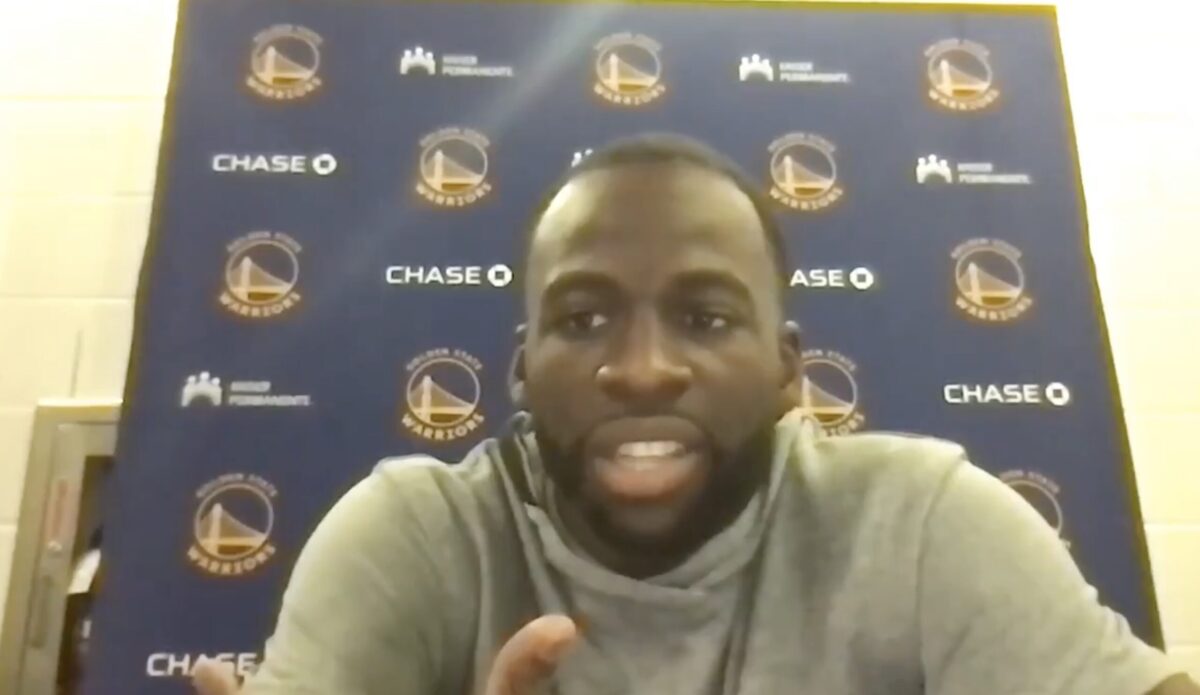 Golden State Warriors star Draymond Green launched into a rant against female athletes “complaining” for equal play, arguing that they were not putting in enough effort in their fight for equity.

KRON4 sports reporter Kylen Mills took to Twitter to share a clip from the interview — tagging captain of the U.S. women’s national soccer team Megan Rapinoe, and New York Liberty star Layshia Clarendon — both of whom have been pushing for pay equity in their respective leagues:

“I’m really tired of seeing them complain about the lack of pay, b/c they’re doing themselves a disservice by just complaining.”
Today Draymond talked about his Tweets about women’s sports that received criticism from athletes like @mPinoe & @Layshiac @kron4news #DubNation pic.twitter.com/7iUQ982jx9

According to NBC Sports, the average WNBA salary is slightly less than $100,000, making it roughly 1.5 percent of the average NBA salary, which exceeds $7 million.

“I’ve seen so many complaints recently of women talking about the pay gap between what we make and what they make,” Green began. “And I feel where they’re coming from. I know what I put into this, to be great. They put in the same time in that we put in. So, I understand what they’re saying.”

Despite understanding why athletes would want equal pay for equal work, Green is still “really tired of seeing them complain about the lack of pay because they’re doing themselves a disservice by just complaining.”

WNBA players have done far more than “just complaining” when it comes to the fight for equal pay. Just last year, in February 2020, WNBA stars Sue Bird and Diana Taurasi reached a groundbreaking agreement with the league, which would allow players to earn up to $100,000 to attend a one-year training camp in the United States ahead of the Olympics.

Bird and and Taurasi wanted to create more opportunities for WNBA players during the winter season in an effort to inspire momentum for the Olympics.

WNBA players, including Bird and Nneka Ogwumikem, also negotiated a new contract that now allows top players in the league to receive more than triple their salaries. While Bird was fighting for equal pay in her sport, her fiancée Rapinoe has been championing for equity in the U.S. soccer federation.

Clearly aware of the tireless fight for equal pay across the sports world, Burke pointed out that female athletes are going far beyond just complaining, yet Green suggested they simply were not aiming high enough.

After laying the blame on female athletes for not putting in enough additional work to merely get a fair salary, Green later placed the responsibility on companies for claiming to “support women,” yet simply using feminism as a marketing strategy.

“And everyone uses it to their advantage,” he said of companies and corporations. “Yet these women are not using these people who are saying those very things to their advantage. So, then, it just becomes a complaint that falls on deaf ears because they’re going to use the same excuse.”

“Like I said on Twitter, we know the story of LeBron James. We’ve heard it a million times. Do you think those stories don’t help the connection between a fan and understanding that player? It does,” Green continued. “But no one puts the money toward the marketing of women. So, as great as Diana Taurasi is, you don’t know her story because these companies don’t put money toward marketing women.”

When Green made similar comments on Twitter, Bird did not entirely object, noting, “The things ur saying are the EXACT things we’ve been fighting for,” yet she pointed out that while he “got the problem right,” his blame was misplaced.

?? @Money23Green read ur “thread” (@Jack help! ?) The things ur saying are the EXACT things we’ve been fighting for. We don’t ask for NBA money, we point out the discrepancy to highlight the lack of investment & coverage. You got the problem right, you just tagged the wrong ppl https://t.co/H5wc706BfE

Bird later retweeted a post elaborating on the exact efforts female athletes have made to connect with companies and fans, as Green claimed corporations were not investing in women due to their failure to engage and tell their stories.