Alan Grayson Announces Run For Congress: ‘Washington Is Now Divided Between The Meanies And The Weenies’ 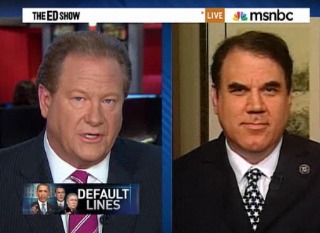 Former U.S. Representative Alan Grayson paid a visit to The Ed Show, telling host Ed Schultz that, were he still in Congress, he would decidedly not vote for any cuts to Medicare or Social Security, and he would be “grabbing everybody else by the collar and telling them they should do the same.”

Furthermore, he suggests that a great way of cutting back would be to end our current wars in Afghanistan, Iraq and Libya. He also offered deep criticism of both parties:

Grayson announced he is emphatically opposed to this sort of compromise, adding that he’d like to see Medicare expanded to cover dental work, hearing aids, etc. Schultz then asked, bluntly, “Is this President weak? Why isn’t he saying what you’re saying?” Grayson replied diplomatically:

Grayson then announced, right there and then, that he’s running for Congress once again.