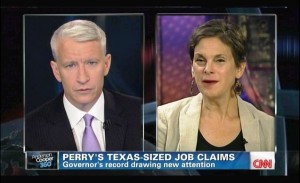 As Gov. Rick Perry is getting more attention in anticipation of his presidential run, the media is naturally turning its magnifying glass on his record as governor in Texas and, in particular, his decision to both rail against and accept stimulus money from the federal government.

On his show tonight, Anderson Cooper focused on Perry’s economic bona fides; specifically, his record on job creation and balancing the state budget. Regarding the governor’s claim that Texas created more jobs than any other state, and that more than half the jobs created in the last year were from Texas, Cooper confirmed this was an accurate statement. However, he pointed that many of those jobs were minimum wage jobs, and that a portion of Texas’ labor force is most likely made up of illegal immigrants.

But it was Perry’s record on the 2009 federal stimulus that garnered the most attention from Cooper. The governor claimed that he was able to balance the budget without raising taxes or getting money from the state’s “rainy day fund,” but what Perry didn’t mention was that in lieu of the emergency fund, Texas accepted over $6 billion in federal stimulus money. Cooper pointed out that on the day Perry requested the federal stimulus money, he released a post on his website telling voters to oppose the recovery act.

When Cooper brought out the panel, conservative blogger Erick Erickson reluctantly agreed that Perry was “double-talking” on the stimulus, but was quick to point out that every single governor who opposed the stimulus ended up taking federal money anyway.

A lot of them did it because of pressure from their state legislature or, in some cases, I think Texas was one of them, Democratic delegations said, “We won’t give you money for education unless you take stimulus funding,” and Texas was affected by several of these things. But yeah, he’s going to have to explain that on the trail.

Roland Martin responded by saying that the Texas legislature is majority-Republican, so Perry would not be able to use the same excuse as other governors in explaining his decision to accept stimulus money.

Looking ahead to the governor’s assumed presidential run, Erickson predicted that Perry would draw more voters away from Romney than other candidates, while Roland Martin suggested the governor would be able to draw Tea Partiers from Michele Bachmann’s camp and social conservatives from Rick Santorum. Whatever the case may be, Perry will definitely prove to be a formidable opponents for many of the candidates, given that his presence has already overshadowed so many of them, before even announcing.