Martin Henderson | Man Peter Dinklage Mentioned | Who Is He
Video

At The Golden Globes Peter Dinklage Said: ‘Google Him’ – Who Is Martin Henderson? 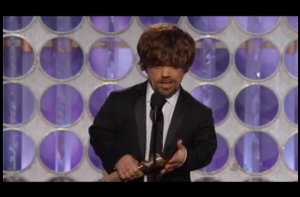 Who is Martin Henderson? While accepting his Golden Globe award for the series Game of Thrones, actor Peter Dinklage told viewers that he’s keeping a man named Martin Henderson in his thoughts, urging those who didn’t recognize the name to “Google him.”

Henderson, for those who might be Googling him tonight, is an Englishman and a little person who recently survived an attack while celebrating his 37th birthday last October. Henderson had been standing outside the White Horse pub in Wincanton, Somers when he was grabbed and thrown into the air by a fellow patron, landing on his back. He suffered nerve damage in his spine and, as a result, may never walk again.

His attack was, evidently, a “copycat crime” modeled after the night that rugby star Mike Tindall‘s drunkenly decided it might be fun to go to a bar and throw little people around in a so-called “dwarf-tossing” contest. The Guardian reported on England’s response to Tindall’s actions, noting that “The Sun reported that the group were ‘watching a light-hearted dwarf-throwing contest.'” Additionally:

Rich Deane, the Altitude Bar manager, insisted via email that the players had been perfectly well behaved, pointing out that the dwarf event had been misinterpreted. “Firstly there was no dwarf throwing – that’s just not cool!” he wrote. “Secondly there was no scandal by any of the English rugby players that we saw. They were great lads, not throwing the midgets, it was all light-hearted good humoured fun! This is the tabloids taking photos out of context and telling silly stories.”

Have a look at Dinklage’s speech, via NBC: