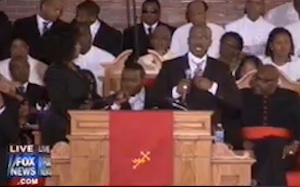 Gospel legend BeBe Winans gave one of the most emotional eulogies during Whitney Houston‘s funeral, as his tears sometimes tripped him up, but he valiantly trudged on and gave a moving tribute to the pop star. “We spent a lot of time together and we talk about her voice and we talk about her talent, which was a beautiful thing, but what I’m going to miss is crazy Whitney,” Winans quipped.

RELATED: Watch Tyler Perry’s Moving Homage To The Grace Of Whitney Houston At Her Funeral

“If anything I want to share in what I’m going to miss is that Whitney when we were getting ready to to our first major headline tour and Whitney told us we had to come over. So we came over to the house and she said ‘Okay,’ we were sitting in the closet…her closet was about as big as a church so we weren’t crowded. So we’re sitting there, okay, so, all right, I’ve got to tell you what we’re going to do, we’re going to– I went and i had some uniforms made, looked at her, what? she said i’ve got the background dresses for the girls, the three girls in a cream, and, and i got the band and the cream for the shirts and bb i got you a suit, a cream suit and CeCe, I got you a melon dress made and I got me a green one. and she made her a green one. because we going to headline and she was determined and Clive, I know it made Clive so mad, but she decided at the height of her career she was going to come sing background with BeBe and CeCe!”

“And so we sat there and we said, Whitney, you can’t do that, nobody told you to do that, girl, this is not a material relationship!”

He went on to honor Houston by singing “I Really Miss You” with sister CeCe Winans.