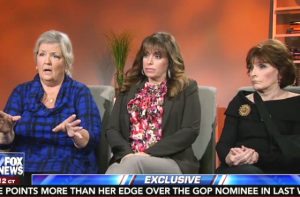 All three women have made sexual assault and rape allegations against Bill Clinton, and Hannity asked them, “Considering [what] is in the news today with Donald Trump, has the mainstream media been receptive to asking you three about your stories?”

All three said no. When Hannity said “nobody called you,” they all affirmed the sentiment. Broaddrick said, “Not until we went into the Trump spin room.”

Hannity also asked them if that “reeks of politics.” They all said yes.

For the record, at least two reporters said they attempted to reach out to Willey:

Kathleen Willey tells Sean Hannity the mainstream media hasn't reached out to her. I contacted her repeatedly for a year. No response.

I spoke to her for a half hour in January but she refused to let me quote her for the record https://t.co/edCIliLTpK

Broaddrick says she was not reached out to by TV networks, but she did speak to BuzzFeed for a big profile the site did on her. And one other reporter said she reached out:

Accusers say on #hannity that no mainstream media outlets reached out. I reached out to Juanita Broaddrick in May and then again on Tuesday.