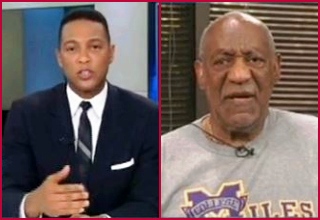 CNN anchor Don Lemon has, of late, turned the focus of his frequent conversations on race to the idea of personal responsibility in the African American community. On Saturday night’s edition of CNN Newsroom, Lemon continued that controversial trend with comic legend Bill Cosby, who has also felt the heat of controversy on the subject. Cosby talked to Lemon about young black men raising their kids, over-medication of juvenile inmates, and may have even coined a new word: “No-groes.”

For the past few months, Don Lemon has courted controversy with several segments pegged to his general agreement with comments by Fox News personality Bill O’Reilly, aimed at solving problems within the black community. Legendary comic actor Bill Cosby has also stirred controversy by airing grievances against his community, but neither Lemon nor Cosby have backed away from their criticisms. In Saturday night’s interview, Lemon asked Cosby to reflect on the 50th anniversary of the March on Washington, and what kind of African American leaders are needed now.

“I think it has to come from the universities,” Mr. Cosby began. ” I think, women, strongly because when you see 70%, in research, that says they are the leaders of the household, what we need is for people to realize I want to raise my kid. I want to go back and get my three kids. I want to take on that responsibility. I want to love my children.”

He added that one of the sights he’d like to see more of is what he saw at the recent Essence Festival, “walking around to see, yeah, to see a black male with his child on the shoulders and holding.”

He also encouraged young people who might not be able to go to a prestigious college to “go to community college. Okay, you backed up and didn’t do well. You quit school but now you find you need that high school credential. Go to the community college.”

Cosby related the idea of personal responsibility to his own experience, adding that “At age 19 and a half, I knew I didn’t want to do certain things. It is not what they weren’t doing to me, it’s what I wasn’t doing. It’s a very simple thing.”

Later in the interview, Mr. Cosby talked about what he sees as an overemphasis on medicating juvenile inmates, versus counseling. “If you drug these people, and then you release them, and there’s no prescription for them to get to take to do the same thing, and they go back to the same place,” he said, adding “Now, about this time, this is when you hear the no-groes jump up and say ‘Why don’t you talk about the good things?'”

“Because the good things happen to be taking care of themselves pretty well,” he answered. “We are trying to help those genius’, those not genius’, people who deserve, because they are human beings on this earth, in the United States of America, we are trying to get them in a position so they will understand and want to.”

“Well, it’s because they feel, I think they feel embarrassed,” Cosby replied, and related a story about Sammy Davis, Jr. “We were in playing in a routine, and I told him I knew something. He said no you don’t. I said yes, I do. I said it. He said no, that’s not the way it goes. I said the same thing louder. He said, ‘Bill, saying it loud don’t make it right.'”

“And so, every loud voice you hear yelling about something,” he explained, “and saying ‘Well you just — you lost us. You became a millionaire,’ the reason why I’m giving you this information is because I was living in the projects. I was not taking care of myself in terms of managing my education, and once the door opened and I saw quote, unquote, the light, I started to become very successful.”

Here’s the interview, from CNN Newsroom: