Bill Maher: Only Race Could Explain 51% Of Republican Voters Being Birthers 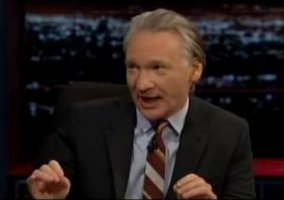 Bill Maher was startled by the results of some polls on Republicans’ beliefs he read recently, and devoted a segment on tonight’s Real Time to analyzing them. And while any segment where Maher discusses Republicans is in danger of turning into a bash-fest filled with accusations of racism, this one stayed calmer…and produced a pretty good segment of television.

First, Maher cited poll numbers that said 46 percent of Republicans think Obama Muslim, while just 24 percent believe he’s a Christian. (We’re not sure why Maher would be particularly alarmed by the latter statistic, since he doesn’t really think Obama’s a Christian, either.) Maher seemed more troubled by a different number: that supposedly, 51 percent of Republican primary voters think Obama wasn’t born in America. Hearing that figure, Maher could only ask his panel’s conservative, David Brooks: “Is there a number where you just go, ‘I can’t be associated with these people’?”

Brooks (a conservative, not a Republican, as he noted) said that saying that you believe Obama was born in U.S. while also saying you’ll let others believe what they want is “a cowardly way out of this thing.” And Maher had his own viewpoint, which (surprise) involved race:

“If 51 percent think he was not born in America, I don’t know where that else is coming from except race. What more could [Obama] do to be the perfect family man?…There is nothing about this man that is un-American, except, to them, his color. I gotta think it’s coming from that place.”

Meanwhile, Daily Beast/Newsweek editor Tina Brown thought Tea Partiers were “being exploited by political charlatans,” while Brooks said he thinks “every Republican in Congress” actually believes Obama’s American, but is afraid to say so out loud. Ed Rendell, former governor of Pennsylvania, concurred, saying it’s all symptomatic of being “afraid to do anything” – and for the record, he said it affects both parties. A nation of wusses, indeed.

The segment was all over the place – there was also a conversation about the Paul LePage mural mess, Rendell brought up gun control, Brown brought up Lady Gaga – but an entertaining (and level-headed, as far as these things go) conversation all the same. Video, via HBO, below.