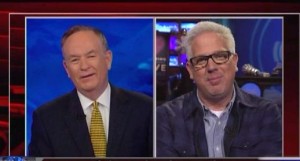 To bolster his claim, Beck turned to Gingrich’s continued assertion that the most effective president in U.S. history has not been Ronald Reagan but rather FDR, because, as Beck paraphrased, “he’s a Progressive in the good times and he knows how to get things done in the bad times.” Plus, he added, Gingrich loves Teddy Roosevelt, father of the Progressive Movement and is “positively Wilsonian” when it comes to foreign policy.

“Woodrow Wilson!” he said. “That’s not good.” But, O’Reilly noted, Roosevelt’s Progressive party is not the same as the progressive movement as it exists today.

“Don’t argue with me about the Progressive Party!” laughed Beck.

Beck then shared that, were he an Iowa voter, he’d go with Michele Bachmann as his top candidate. O’Reilly then deconstructed Bachmann’s campaign, specifically mentioning her “harsh” stance on homosexuality.

O’Reilly also accused Beck of “interpreting” Gingrich’s statements rather than simply reiterating them.

Oh, and if you were crestfallen over the lack of babies wearing ties on cable news programs, this was definitely the segment for you.