Jake Tapper And Jay Carney Get Into It Over Briefing Protocol, Bestiality Evoked Again
video

Jake Tapper And Jay Carney Get Into It Over Briefing Protocol, Bestiality Evoked Again 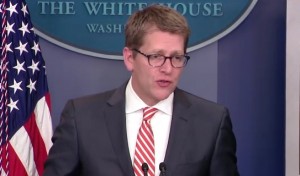 After a streak that, I think, endured the whole of human history, the subject of bestiality has now come up twice during White House briefings this month. In a quasi-friendly exchange this afternoon, ABC News Senior White House Correspondent Jake Tapper let out some annoyance at Press Secretary Jay Carney for skipping around the room (with the questions, not literally skipping. It’s really too cramped for that), and sarcastically told Carney “No, America wants to know about your position on bestiality,” a reference to a Les Kinsolving question from last week.

There has long been tension between the White House reporters in the first two rows, who typically take up a disproportionate amount of time during briefings, and the rest of us who struggle to get a question in. Robert Gibbs, Carney’s predecessor, would generally work his way from from left to right, front to back, usually finishing up at around the fourth row. Carney, at the beginning, would take care of the first two rows, and then start to jump around, but soon began to mix it up much earlier in the briefings.

He did so last week by calling on frequently-skipped WorldNetDaily correspondent Les Kinsolving early in the briefing, and was rewarded with a question about the President’s attitude toward bestiality. When Carney skipped from the front row back to National Journal’s George Condon at today’s briefing, Tapper protested.

“Jake, I’ve been doing this for months,” Carney said.

Carney replied “Oh, I’m sorry. Tell it to your colleagues.”

Tapper shot back, “You just decide you’re going to break with decades of precedent and just going to…”

“I’m going to ensure that 49 people in these seats, and move back and forth…” Carney began.

“Okay, then take a question about bestiality, go for it,” Tapper interrupted. “No, America wants to know about your position on bestiality.”

“I’m absolutely going to take care of everyone in the front row.” Carney said.

For what it’s worth, Tapper’s annoyance isn’t simply a matter of entitlement. He’s probably one of the busiest, hardest-working reporters on the White House beat, and the longer he has to wait to get his questions in, the closer he’s pushed up against whatever deadline comes next. He’s also not a question-hog, typically keeping his exchanges with the press secretary relatively brief. Others in the front rows treat the briefings like a casual dinner chat.

Carney, a former reporter himself, has endeared himself to the back six rows with his more egalitarian approach, and his briefings tend to last significantly longer than Gibbs’. I can’t be sure that this means more people are getting questions in (ironically, Les Kinsolving would know; he keeps detailed charts on the subject), but that seems likely.

Incidentally, the bestiality question that started it all is now moot: the ban on bestiality will remain in the Uniform Code of Military Justice. For now.