Charles Krauthammer: Republicans Should Not Take Away Funds From Obamacare 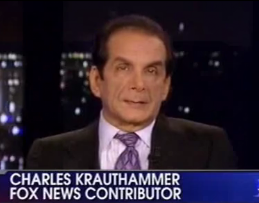 Columnist and Fox News contributor Charles Krauthammer is often the conservative contrarian and sometimes referred to as “a brilliant man,” therefore Republicans are often very interested to hear his advice. While many Republicans in the House of Representatives are eager to return to Congress in January so they can start defunding Obamacare, Krauthammer urged they put the brakes on such plans.

While Krauthammer still favors a symbolic repeal of Obamacare in the House (symbolic only since the measure would fail to pass in the Senate), he would prefer Republicans attack the bill through hearings rather than waste energy trying to defund it. Krauthammer elaborates:

I am skeptical about taking away the funds because what it will do, it will poke holes in the system. It will make it more chaotic . . . and in the end, if healthcare collapses or if it becomes utterly unworkable, the Democrats will have a way of saying ‘well, it was all these injuries inflicted by the Republicans that made it not work.’ I think the smarter approach is to simply expose to the American people what’s in the bill. All the arbitrariness, all the incredibly increased expenses, all the contradictions in it, also the inherent corruption in it.

Krauthammer, who recently claimed Obama “snookered the GOP into a second stimulus” with the tax compromise, is again provocatively suggesting that the best political strategy for Republicans is to keep their hands off Obamacare and, in his estimation, let it fail on its own.

Watch the clip from Fox‘s Special Report below: