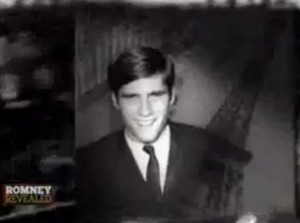 When a friend tweeted me about a line from CNN’s Romney Revealed documentary, I thought he must have misheard or paraphrased it, but as it turns out, Gloria Borger‘s narration of the Mitt Romney profile really did contain the most ridiculous sentence I’ve ever heard on television, so ridiculous that I’m half-suspicious CNN is actually a cabal of master satirists who are making fun of the Republican presidential candidate.

The portion of the documentary in question covers Mitt Romney’s stint as a door-to-door Mormon recruiter in 1968 France, a duty which helped him to avoid military service in Vietnam. Earlier in the doc, narrator and interviewer Gloria Borger glossed over the fact that Romney sought, and received, four deferments during the Vietnam War (and later lied about it), instead saying simply that he was “exempt as a student, and with a high draft number.”

The doc also notes, as an example of Romney “becoming his own man,” that he protested in favor of the draft that he so skillfully avoided, before moving on to the time he spent in France, a time that Romney once described as “tough” because the French were “not happy to see Americans, because we were in Vietnam at the time.”

Yes, you heard that right. Not only did Mitt Romney protest in favor of sending other people’s children to die in Vietnam, even as he avoided service himself, he then complained about how those dying Americans made it “tough” for him while he was in France avoiding service.

Perhaps to avoid charges of bias, the documentary steers clear of these contradictions, but then takes the whitewashing to blindingly absurd levels by introducing the next segment with the aforementioned most ridiculous statement I’ve ever seen on television. “In 1968, France was a dangerous place to be for a 21-year-old American,” Borger says, “but Mitt Romney was right in the middle of it.”

That’s right, in 1968, the year in which the highest number of American deaths in Vietnam were reported (16,592), France was a dangerous place to be for a 21-year-old American who was avoiding service in Vietnam. Aside from the constant danger of having one’s eye put out by an errant baguette, what hardships did Mitt Romney face while he was “in country?”

Well, all those dying Americans were causing protests in France, and as a result, says fellow Romney missionary Mike Bush, “There was no train service, there were no buses, no newspapers. The electricity would go off from time-to-time.”

The electricity would go off from time-to-time? Mon Dieu. Think of the horrific flashbacks to rudely-interrupted Gilligan’s Island reruns and spoiled escargot. But the horrors of Vietnam-era France didn’t end there.

So, CNN’s story is that Mitt Romney had it tough during Vietnam because the protests in France made it hard for his dad to send him money. That’ll give anyone the thousand-yard stare.

The quest for “objectivity” has increasingly become the quest to avoid charges of bias, but in Romney Revealed, CNN seems to have bent over so far backward that they ended up unintentionally parodying the poor guy. Mitt Romney, and CNN’s audience, deserve better.