CNN Reporter to Carney: Does Obama ‘Feel as Though He’s Above the Law?’ 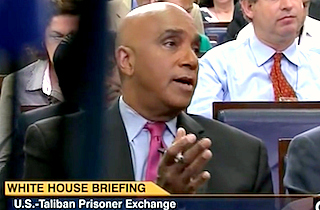 After questions about the legality of the White House sidestepping a law requiring Congress be given thirty day approval notice for a prisoner swap, CNN chief Washington correspondent Joe Johns asked outgoing White House Press Secretary Jay Carney if President Barack Obama “feel[s] as though, on this issue and this kind of issue, he’s above the law.”

“Absolutely not,” Carney replied. “We have repeatedly noted concerns with this requirement. In signing statements, [Obama] has consistently made clear that the executive branch must have the flexibility to act swiftly in conducting negotiations with foreign countries regarding the circumstances of detainee transfers if necessary, and that was certainly the case here.”

RELATED: Carney Insists U.S. Did Not Negotiate with Terrorists: Bergdahl ‘Was Not a Hostage’

Johns also asked if Obama’s deployment of signing statements was in line with his original view as candidate that restraint is called for in their use.

“I appreciate the way you phrased the question, because it’s often misreported that somehow he took a position against all signing statements, which was never the case as senator and candidate,” Carney said. “He made it clear that there were times when it would be appropriate, but that the authority to issue signing statements should not be overused or abused. …But there will be and have been circumstances when signing statements are necessary, because of the president’s view and the executive branch’s view of constitutional issues in the legislation.”