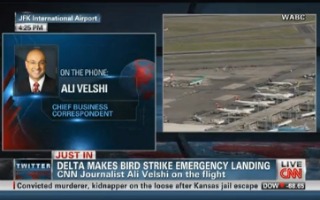 If you think being a media blogger has been fairly horrifying this week, well. Writing about Ted Nugent wrestling a dog to the ground in the 7-11 cookie aisle because it told him his mother had never worked a day in her life (This is what happened, yes?) pales in comparison to the ordeal CNN chief business correspondent Ali Velshi went through this afternoon. Velshi was on a Delta flight to Los Angeles when he heard a horrible noise…

It was seconds into the takeoff and there was a loud grinding noise and the plane started shaking a little bit, much of a shake than you would typically hear when they’re retracting the landing gear. Moments later, the cabin started filling with smoke. It was unclear what was going on. The captain then came on a few minutes later and said it appears that there’s been a bird strike.

RELATED: Person Of The Year: Is Capt. Sully More Important Than President Obama?

Velshi recounted that a fellow passenger had been filming the goings-on with his iPad, actually catching the moment that the birds flew into the plane’s engine. He added that the landing was smooth and the flight crew was very calm and professional throughout the ordeal. “I’m going to be a little nicer to everyone for the rest of the day,” he said.

Also a pilot, Velshi said he’d never heard a sound like the grinding noise he experienced on the plane. But, while concerned, he said he didn’t want “look like a sissy” in front of the cool and collected flight attendant near him.