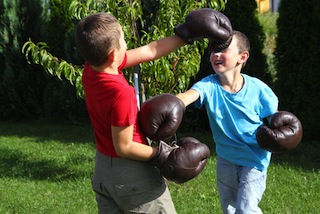 When I was a child, if I ever got in trouble for, say, talking in class, chances are good that I’d use the ol’ “But, mom! Billy down the street was talking too!” excuse. And do you know what my mom did? Did she get into a lengthy debate about the differences in circumstances between myself and Billy? No. She reminded me that I was not Billy, she was not Billy’s mom, and I would not be leaving the house that weekend.

It was a simple lesson. So why on earth can’t political pundits get it through their thick skulls?

Over the past few months, as we’ve gotten closer and closer to Rich Man vs. Rich Man 2012: The Reckoning (aka our presidential election), it seems like every single political talk show has turned into the lengthy whine-sessions of a bunch of grade schoolers.

Earlier today, when discussing the inflammatory remarks that Ted Nugent has gotten in trouble for on MSNBC, S.E. Cupp stated that she didn’t like what the singer had said. However, she then rushed to point out that liberals totally say bad things too, pointing to such striking examples as Craig Kilborn (?) and even the target of one of the most laughable political smear campaigns in recent memory: the rapper Common.

Now, I could point out that no one was rushing to ask for Craig Kilborn’s endorsement or I could say that Common’s lyric using a Biblical “burning bush” reference to knock the Iraq War is a far cry from Nugent wanting Obama to “suck on [his] machine gun.” I could write a whole column about that. But what would it get me? Would it result in a useful analysis of violent imagery in our political discourse? Absolutely not. It would result in a useless race to attack the “other team’s guy.”

Obviously, this tactic isn’t anything new. In the 2000s, evil genius Karl Rove perfected the method of attacking one’s enemy with your own weaknesses, and that’s a strategy that dates back to Art of War times. However, it seems like we’ve been seeing it a lot more often now. How often? How about “every single news cycle of the past two months” often.

It really started to get bad during the big Democratic “War on Women” push. The “War” was gaining traction and exploded when the Rush Limbaugh slut-roversy hit. However, seconds after the words “I’m sorry” had squeaked through Limbaugh’s lips, the conservative talking heads successfully changed the entire narrative. This wasn’t a story about something Limbaugh said anymore. It was about how Bill Maher totally gets away with saying other stuff!

And it just continued. The Democrats claimed the Republicans were hurting women with restrictive laws. The Republicans responded by…talking about Hilary Rosen.

It’s gotten to the point where every single news story has to have a liberal and conservative angle. How about a young boy being gunned down in the street? That should be something we all care about, right? Well, not if too many liberal celebrities talk about it. Then it’s a “liberal issue” and conservative blogs begin rushing to dig up (no pun intended) the still-fresh corpses of white murder victims as a point of comparison.

This kind of thinking is completely unhelpful. When a problem comes up in our country, we should analyze it individually, not begin looking for some mirror image to complain about.

And certainly don’t think this is just a conservative issue. Oh, God no. Try your best to point out to most liberals that MSNBC’s programming just might have an objectivity problem and I’ll bet you money that you will hear the words “Fox News,” “is,” and “worse” within five sentences.

Look, people, the world is not black and white, and we as Americans aren’t obligated to choose whether we will always side with black or white. The world is grey. It will always be grey. And, while we may disagree on what certain shades of that grey looks like, it doesn’t mean that every other thing another person says is wrong.

I know it’s an election year, but we all really need to stop trying to defend our “teams.” Unless you are officially employed by the RNC or DNC, then you are still an American with the ability to engage a little bit of critical thinking.

But lets go back to the issue that really started this trend in full this year: women.

Both parties claim to really love women now, right? You just go ape over those gals. So how about you start acting like the moms you claim to admire oh so much? Next time one of your kids gets in trouble and starts claiming how the other boy was just as bad, cut him off right there. Anything else is a waste of time.