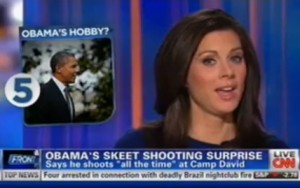 President Obama spent years dealing with “Birthers” like Donald Trump, and now, it seems, he has a new set of conspiracists to deal with: “Skeeters” who are convinced that the President was lying when he told The New Republic editors Chris Hughes and Franklin Foer, when asked, if he had ever shot a gun,  “Yes, in fact, up at Camp David, we do skeet shooting all the time.”

Foer followed up by asking, “The whole family?”

The President replied, “Not the girls, but oftentimes guests of mine go up there. And I have a profound respect for the traditions of hunting that trace back in this country for generations. And I think those who dismiss that out of hand make a big mistake.”

You expect this from the likes of Eric Bolling, but on Monday night’s OutFront, CNN’s Erin Burnett reserved herself a place in the inaugural “Skeeter” club when she told viewers “Obama the skeet shooter. Yeah, I’m not making this up, and if someone is, it isn’t me.”

Burnett played a clip from today’s White House briefing in which CNN’s Jessica Yellin quizzed Press Secretary Jay Carney about the activities at Camp David, and while Yellin did press Carney for photographic evidence of said skeet-shooting, she stopped short of speculating that the President of the United States is a liar.

Yellin asked, “How often does the President go skeet shooting? And are there photographs of him doing so?”

Carney replied, “I would refer you simply to his comments. I don’t know how often. He does go to Camp David with some regularity, but I’m not sure how often he’s done that.”

“Is there a photograph of him doing it?” Yellin pressed.

“Why haven’t we heard about it before?” Yellin asked.

“Because when he goes to Camp David, he goes to spend time with his family and friends and relax, not to produce photographs.” Carney replied.

Burnett also says that CBS News’ Mark Knoller “told us he’s heard of bowling, golfer, archery, but not skeet shooting,” but Knoller apparently has “heard of” skeet shooting at Camp David, since he tweeted a photo of the activity on Sunday.

Yellin at least has the defense that it’s her job to “just ask questions” (although repeated requests for photographic evidence wouldn’t fly if the subject were, say, the state of the President’s marriage), but Burnett clearly speculated, without any evidence, that President Obama lied. Such speculation is to be expected from a deranged partisan, but not from a journalist. She owes him an apology.

Here’s an exit question for the likes of Burnett, Yellin, and Bolling: Why aren’t any of them, or anyone at all, asking for photographic evidence that Vice President Joe Biden, who also recently came out as a skeet-shooter, has skeet-shooted? Curious, indeed.