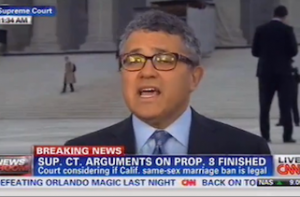 CNN’s Jeffrey Toobin has been burned before, and as he said on air today, he’s not going to let it happen again. The legal analyst played it very safe while offering his take on the Supreme Court’s Prop 8 hearing, not giving any indication one way or the other on what the ruling could be. “I’m now not in the business of making predictions,” he told CNN anchor Ashleigh Banfield this morning, “but I think it is even harder to predict the result of this case after hearing this argument.”

Toobin was alluding to his famous blunder on the Supreme Court’s decision to uphold the Affordable Care Act last spring. He spent weeks predicting that the court would strike down the law, and called Solicitor General Donald Verrilli‘s arguments “train wreck.” When the court handed down the decision to keep Obamacare intact, Toobin went on CNN to say it was time “for me to eat a bit of crow.”

Clearly not wanting to make a similar mistake again, Toobin summed up the hearing by explaining what most SCOTUS-watchers already know. Justices Scalia and Roberts were “hostile to the idea of imposing same-sex marriage.” The liberal justices “seemed favorably disposed.” And, of course, Justice Kennedy “as so often is the case did seem like he was in the middle and he said things that would give comfort to both sides.” Beyond that, Toobin would not say which way he thought the court would lean.

Toobin later confirmed suspicions that he was “playin’ it safe” and responded to those who question his “credibility” on Twitter: