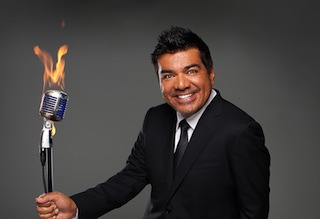 On Saturday night, HBO aired a new stand up special from comedian George Lopez. During the special, Lopez promised his audience that he was going to start “talking some shit” and talking some shit he did. Lopez joked that Mitt Romney is “a f**king Latino” who just “won’t admit it” (referring to the candidate’s father being born in Mexico) and then said about Sheriff Joe Arpaio…well, lets just say he said the type of things that you’d expect a Latino stand up comic to say to a predominantly Latino audience when talking about a guy like this. He also called both men “puto” which is apparently an anti-gay slur. This has led the conservative LGBT group GOProud to demand an apology from the comic.

In other news, I just learned a new word!

Lopez’s bit has been getting some media attention. Sheriff Joe even went on local Arizona news to challenge the comedian to “come say it to [his] face.” However, GOProud appear to be the first to point out the anti-gay angle.

“Jimmy LaSalvia, co-founder and executive of GOProud, said the left has a double standard when it comes to using homophobic slurs.

‘This is just the latest in a long line of liberals who get a free pass for using gay slurs,’ LaSalvia said. ‘If a conservative had said that about a liberal politician, the gay left would be chaining themselves to a nearby fence!

‘He should apologize, but like other liberals who say such stuff like that he won’t be under any pressure to.’”

Since I’m about as white as a bag of flour being poured on a polar bear during a snow storm, I had no idea whether this term was actually offensive. Fortunately, I got to have this wonderful conversation with Mediaite’s Alex Alverez:

JON: Is there an English word that corresponds to it?

Well, ok then. I’m going to take her word for it. I guess it is offensive and Lopez should certainly apologize for it.

GOProud does have an interesting point though. It seems like you hear conservatives being pressured to apologize for saying homophobic things way more often than liberals. I wonder why that is. Hmmmm…

Anyway, interesting fact; If Mitt Romney and Sheriff Joe actually were homosexual male prostitutes and Mitt Romney was elected president, they could never marry each other no matter how much they were in love. Interesting.

Watch video of the offending Lopez’s stand up from HBO below followed by Arpaio’s reaction from Arizona’s ABC 15: