Dem Strategist Flips Out On Bill Cunningham Over IRS On Fox: You’re On ‘Witch Hunt’ Against Obama
video

Dem Strategist Flips Out On Bill Cunningham Over IRS On Fox: You’re On ‘Witch Hunt’ Against Obama 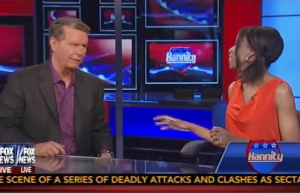 Sean Hannity reported on his show tonight more recent revelations that a vast majority of IRS lawyers supported President Obama over Mitt Romney in the 2012 election, vindicating, for him, that the IRS tea party targeting scandal was definitely political. Conservative radio host Bill Cunningham declared that the IRS was taking its “marching orders” from Obama, and was confronted by Democratic strategist Tara Dowdell, who accused Cunningham and like-minded conservatives of unfairly implicating the president in the scandal when there’s been no evidence so far to suggest he was involved.

Cunningham linked the tea party targeting scandal to an overall Democratic effort in the 2012 election to suppress the tea party vote. Dowdell agreed what the IRS did was wrong, but told Cunningham he shouldn’t be using the legitimacy of the scandal as a “witch hunt” to take Obama down a peg. She turned the tables on him, asking why Darrell Issa hasn’t released full transcripts relevant to showing how Obama wasn’t involved.

Dowdell remarked, “I hate to rain on your Obama-bashing parade that’s going on right now.” Cunningham shot back by bringing up the lopsided IRS lawyer donations, to which Dowdell asked how any government employee could back a candidate who wants to slash government. They got into a heated back-and-forth over the efficiency of government, which Cunningham described as “flat, flabby, and flatulent.” Dowdell fired back by pointing out that Wall Street has its fair share to account for, “but you have no problem with that.”

Hannity linked the IRS scandal to the Department of Justice targeting James Rosen and the NSA targeting everyone, asking Dowdell about these seemingly “unconstitutional actions.” Dowdell insisted the important thing is to “make sure those things don’t happen again” rather than bending over backwards to try and find out how Obama was involved. Cunningham mockingly compared Obama to Richard Nixon and pointed out how the president is so busy with fancy dinners and playing golf, he only finds out about these things in the papers.

Dowdell told Cunningham he’s just proving her point by making anything and everything about Obama, and defended Obama against Hannity’s charge that he’s “said very little” about the barrage of scandals he’s had to deal with.