Did Marco Rubio Get His ‘Trump Selling Watches’ Line From Donald Trump? 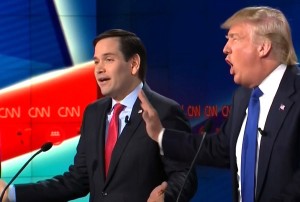 Republican presidential hopeful and Florida Senator Marco Rubio is having a moment right now by dint of his blistering attacks on frontrunner Donald Trump at Thursday night’s debate, and since. Rubio’s roll arguably started with an obviously-scripted line that was so good, it didn’t even matter that Trump stepped all over it. As Trump was riffing about Rubio making a profit selling a house to a lobbyist, Rubio cut in with what is being credited as the line of the night, complete with stand-up comic shoulder shrug:

Within the hour, Rubio’s campaign website already had up a donation page pegged to the gaga, offering broken Rolexes for ten bucks (but not really):

In a particularly poetic twist, it seems possible that Rubio’s kill shot could have originated from an ironic source: Donald Trump himself. Rubio and/or whichever joke writer he hired obviously went through a ton of oppo research on Trump to craft Rubio’s attacks, which means there’s a decent chance they ran across one of Trump’s many quotable lines:

“You want to know what total recognition is? I’ll tell you how you know you’ve got it. When the Nigerians on the street corners who don’t speak a word of English, who have no clue, who’re selling watches for some guy in New Jersey—when you walk by and those guys say, ‘Trump! Trump!’ That’s total recognition.”

That quote is from a 1997 New Yorker interview, but is often included in compilations of Trump’s wit and wisdom.

Either way, it’s fun to think about an alternate universe in which Donald Trump is the guy selling watches, and stroking the ego of some other billionaire by recognizing him.