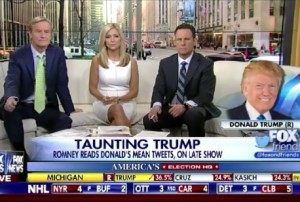 Trump told the Fox hosts that Romney “demeaned” himself with the display. “In what way did he demean himself?” asked Brian Kilmeade.

“I thought it was demeaning to him.” @realDonaldTrump on Romney reading “mean tweets” about himself on Jimmy Kimmelhttps://t.co/1m5iiFJxnd

“I thought it didn’t look good,” Trump responded. “Let me put it this way, I don’t think I would have done that. I don’t think he should have been reading the tweets — those negative tweets. Why is he doing that?”

Trump was accidentally disconnected, but the hosts brought him back at the top of the hour to play the video of Romney for him. “You thought it wasn’t funny, it was inappropriate?” Kilmeade asked.

“Well, he’s a wise guy,” Trump said. “He had a big failure, he has to admit that. He should be trying to unify the party not tear the party apart.”