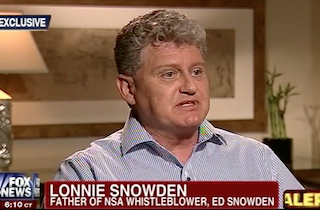 Eric Bolling made an appearance on Monday’s Fox & Friends to offer a glimpse of his interview with NSA leaker Edward Snowden‘s father, Lonnie Snowden. Speaking to Bolling on Sunday night, Lonnie Snowden made clear his opposition to the surveillance programs that were recently revealed but asked his son to stop leaking and return to the country.

“I’m here because I’m really concerned about the misinformation in the media,” he told Bolling. “He is a sensitive, caring young man. … He just is a deep thinker.”

One aspect of the media coverage Lonnie noted specifically was the characterization of Edward as a high school dropout. He had an illness during his sophomore year, Lonnie explained, and missed four or five months of school. Falling behind, Edward tested into a local community college and “completed his high school equivalency.”

Bolling asked Lonnie to speak directly into the camera and address his son. The takeaway, per Bolling: “He was a concerned father. … He is also a concerned American. He is very patriotic.”

To that point, he also offered a clip of Lonnie addressing the actual NSA news. “I don’t want them reading my email,” he told Bolling. “In my opinion, they have no right. Not even under the guise of, ‘We need to keep you safe.’ … Don’t tread on us.”

UPDATE: Fox confirms that a longer version of this interview will air on The Five this afternoon. We will cover that as well.