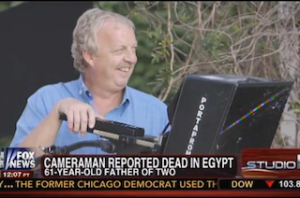 Shepard Smith opened his Fox show Wednesday afternoon with sad news from Egypt, where Sky News cameraman Mickey Deane was reportedly killed by sniper fire while covering the the violent unrest in Cairo. Smith was joined on the phone by Fox correspondent Jonathan Hunt, a longtime colleague and friend of Deane’s, who offered his emotional tribute to the fallen cameraman.

“He was just absolutely one of the best,” Hunt said of the 61-year-old father of two. “He was the life and soul of every shoot we ever went on, every party we ever went to. I cannot put into words just what a great man he was.”

Hunt described Deane as “the most humble man you could meet,” despite his vast amount of experience covering conflicts all over the world. “If you wanted to talk to him and tease out those experiences, he would give you the greatest retelling of history you could possibly have through his lens–one of the wisest minds I met, but he never would lead a conversation with that.”

Asked about whether he or Deane believed journalists are actively being “targeted” in Egypt and elsewhere in the region, Hunt said there are those “we often refer to as cowboys, guys who put themselves in trouble, go to the wrong place at the wrong time,” but Deane wasn’t one of them. “He knew the risks and sometimes I guess it’s just the sad, sad fact, Shep, that the law of averages when you cover so many conflicts sometimes catches up with you.” He ended by calling Deane “the greatest man I’ve ever met.”