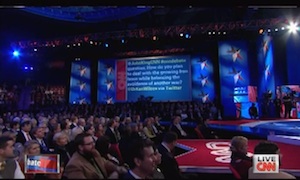 During CNN’s South Carolina debate, the audience erupted in jeers when John King tried to switch topics from abortion before letting Congressman Ron Paul give his two-cents. “All right, let’s take another question,” King said, before being interrupted by the crowd to let Paul respond. “Let’s take a question now from social media, question — before we move on, you want in on this issue?”

RELATED: Rachel Maddow: ‘Ron Paul Voters Are Human Beings, Too. Why Does Nobody Compete For Them?’

“John, once again, it’s a medical subject. I’m a doctor!” Paul exclaimed to cheers. “No, I do want to make a couple comments because I can remember the very early years studying obstetrics and I was told — it was before the age of abortion. I was told taking care of a woman that’s pregnant, you have two patients. I think that solves a lot of the problem about, you know, when life begins and all.”

“I also experienced a time later on in my training in the 1960s when the culture was changing,” Paul continued. “The Vietnam war was going on. The drugs were there. Pornography came in and abortion became prevalent even though it was illegal. The morality of the country changed. The law followed up. When morality changed, it reflects on the laws. The law’s very important. We should have these laws. Law will not correct the basic problem. That’s the morality of the people.”

Watch the audience revolt below via CNN: