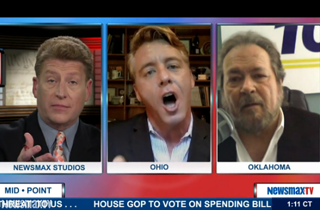 Jimmy LaSalvia , co-founder of now-defunct conservative gay rights group GOProud, may have made some impassioned points during a Newsmax TV segment on LGBT groups being included in NYC’s St. Patrick’s Day parade for the first time ever, but some of it was lost among the chaos of a cable news shoutfest.

“Many people will tell you that when it comes to a parade such at this, people want to make a political statement,” host Ed Berliner said, after radio host Rick Roberts dismissed the idea that gay pride groups could possibly march in a non-political manner during a family-friendly parade. That point was punctuated with stock footage of some rather exhibitionist gay pride marchers.

“So is it not fair to say that the LGBT community needs to show the same respect anyone else would show, appearing in this parade?” the host asked LaSalvia, who was not pleased with the footage shown before.

“I think that question is absurd, because that question is based on the premise that we’re a bunch of crazy people running around naked,” LaSalvia began, and whatever he said after that got lost as Roberts interrupted and the GOProud founder’s mic mysteriously went soft in volume.

“– that’s beyond the pale, frankly,” he eventually finished.

Roberts, meanwhile, continued to suggest that the LGBT community’s only purpose in a parade like St. Patrick’s Day’s would be to make a political statement inappropriate for the venue, which often includes young children. “I’m sorry, I don’t want to see St. Patrick in a leather thong,” he said.

“To suggest that this is about a sex parade is absolutely offensive and absurd,” LaSalvia later asserted.

LaSalvia came away from the segment unhappy, telling Mediaite: “I’ve been on TV with crazy people and bad hosts before, but this was the worst hit I’ve ever been a part of. I seemed to be the only one living in reality. It felt like an episode of The Twilight Zone.”

Watch below, starting around 6:00, via Newsmax TV: