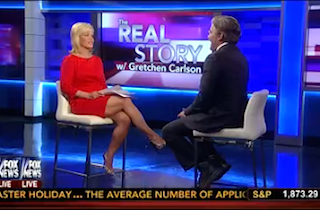 Rivera sent his correspondent over to the Evergreen Diner, which sits just around the corner from Fox’s headquarters on West 47th St., to get reactions from a “great cross-section of people living in the New York metropolitan area.”

“Here’s the problem,” one unidentified man said. “You can’t get away with that in private industry. There’s just no way, you know what I’m saying? Government allows you to get away with it because essentially there’s no one watching the store.”

“It’s wrong,” another anonymous woman agreed. “It does create a hostile work environment and if anybody should be walking by and kind of look over the shoulder to see what’s going on, it’s absolutely harassment.”

While they were not identified on screen by name, the eagle-eyed Carlson called Rivera out when the clip came to an end. “Somehow Charlie Gasparino and Lori Rothman from Fox Business Network — ” Carlson said as Rivera rushed to cut her off.

“Well, we snagged a lot of them,” he admitted. “They’re right next door.”