Hank Williams Jr. Explains Himself On The View And Television Magic Is Made 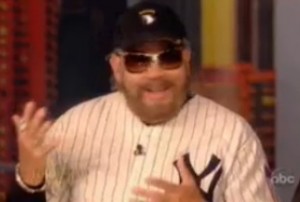 Hank Williams Jr. has been at the center of a controversy after he likened a golf game between President Obama and House Speaker John Boehner to a meeting between Adolph Hitler and Israeli Prime Minister Benjamin Netanyahu during an appearance on Fox and Friends. Since then, he has been fired by ESPN as a pregame questioner of the nation’s readiness for football, and has released his own song which raises his middle fingers to to his foes (in particular Fox and Friends and ESPN.) Today he appeared on The View to explain himself in a roller coaster of a segment.

To recap: no, Bocephus was not specifically comparing Obama to Hitler; he was simply drawing an analogy of opposites (and pulled out a dictionary for Sherri Shepherd to read aloud.) He also appears to hold most of his animus for the Disney corporation (who owns both ESPN and The View), to whom he appeared to blame for an infringement of his First Amendment rights (though its not clear how or why.)

There are many reasons why Williams Jr. deserves credit for going on a Disney-owned television show to explain his side of the brouhaha, not least of which is his decision to wear a Mickey Mantle Yankees jersey. Mantle bridged the gap between Oklahoma and NYC, just as Bocephus himself was aiming to do as well.

The following segment turns out to be a delightful piece of television programming of disparate sensibilities combined to discuss hyperbole, responsibility and the very definition of “meaning” itself (Jacques Derrida would be so proud!) Watch for yourself, courtesy of ABC: