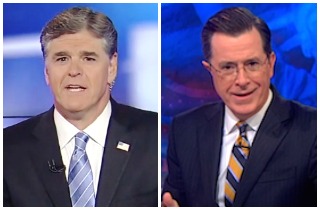 On Wednesday night, Stephen Colbert had some fun with Fox News’ Sean Hannity about his new “Question of the Day” segment. This week Hannity used the segment to humble-brag a bit about his new workout regimen and how he’s lost a fair amount of weight (while randomly invoking President Obama‘s exercises too).

Colbert mocked Hannity and showed him how a “real man” exercises, while still crediting Hannity for being more flexible because “listening to him answer questions about himself on his own show, I know I can never match his ability to get his head up his own ass.”

Well, last night Hannity did not respond directly to that Colbert bit, but it was clearly on his mind as his new Question of the Day was “Who is going to win the late night wars when David Letterman retires?” Spoiler alert: he thinks it’ll be anyone but Colbert.

In fact, Hannity showed a picture of Colbert himself and said, “I predict this guy is gonna come in dead last.”

Watch the video below, via Fox News/Facebook:

And here’s the original Colbert segment, via Comedy Central: