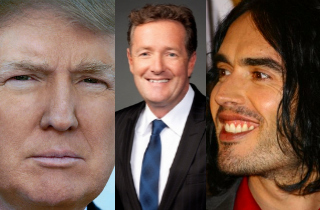 Donald Trump and Russell Brand were engaged in a perfectly good Twitter feud of their own this week, but then Piers Morgan felt the need to jump in and take sides.

It started when, apropos of nothing, Trump tweeted Thursday that he had watched Brand on a recent episode of Jimmy Fallon’s show and found him to be a “major loser.” He quickly suggested that Katy Perry must have been drunk when she married the British actor.

I watched Russell Brand @rustyrockets on the @jimmyfallon show the other night—what the hell do people see in Russell—a major loser!

.@katyperry must have been drunk when she married Russell Brand @rustyrockets – but he did send me a really nice letter of apology!

Of course, Brand appeared on the Late Show with David Letterman this week, not the Tonight Show Starring Jimmy Fallon, but Trump can’t be bothered to get details like that correct.

Soon, Brand was firing back at Trump, linking to damning news articles about his financial standing:

.@realDonaldTrump are you drunk when you write these tweets? Or does that foam you spray on your bald head make you high?

.@realDonaldTrump I don't think your daddy left you any witty ripostes, and everything you have you inherited. http://t.co/q5cJzu9OiW

Later, Trump decided the issue was important enough to commit to Instagram video, with another message aimed at Brand’s ex Perry:

@katyperry will do much better-

All of this apparently seemed like perfect column fodder for Piers Morgan, who used his new position as a writer for the Daily Mail to take — perhaps unexpected — sides in the dispute.

As someone who is no stranger to Twitter feuds, Morgan said he “thoroughly enjoyed” watching Trump and Brand go at it. “Now, I like Brand personally and enjoy his splendidly linguistic comedic romps on the airwaves as much as anyone,” Morgan writes. “For someone with little formal education, he’s incredibly bright and funny. But this whole ‘revolution’ he’s trying to wage is a load of old sanctimonious hog-wash.”

Morgan explains the similarities between the two men, before outlining the differences: “Whereas Trump is supremely comfortable in his own skin, fame and wealth, Brand wants us to believe he’s now trapped in the vice-like grip of a tormented celebrity-loathing freedom fighter.”

“The bottom line is that if I were to be stuck on a desert island with either Brand or Trump, I’d choose Trump any day,” Morgan concludes.

So there you have it. In a fight between Donald Trump and Russell Brand, Piers Morgan wants you to know he is solidly Team Trump.

Watch a clip from Brand’s Letterman appearance below, via CBS: