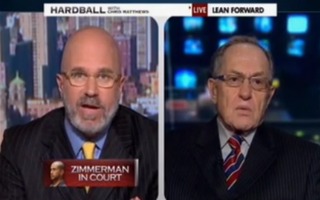 Harvard University law professor Alan Dershowitz appeared on MSNBC’s Hardball where fill-in host Michel Smerconish asked him his opinions of the arrest warrant issued and carried out for alleged Trayvon Martin murderer, George Zimmerman. Dershowitz called the affidavit justifying Zimmerman’s arrest “not only thin, it’s irresponsible.” He went on to criticize the decision to charge Zimmerman for second degree murder by special prosecutor Angela Corey as being politically motivated.

“You’ve seen the affidavit of probable cause. What do you make of it,” Smerconish asked. “It won’t suffice,” Dershowitz replied without hesitation.

Dershowitz said that the elements that would constitute that crime are non-existent in the affidavit. “It’s not only thin, it’s irresponsible,” said Dershowitz.

Dershowitz went on to strongly criticize Corey’s decision to move forward with the case against Zimmerman. “I think what you have here is an elected public official who made a campaign speech last night for reelection when she gave her presentation and overcharged. This case will not – if the evidence is no stronger than what appears in the probable cause affidavit – this case will result in an acquittal.”

Smerconish identified the total lack of any mention of the supposed fight that occurred between Martin and Zimmerman prior to Martin being shot. He said he was disappointed that he did not see any mention of that conflict that led to Martin’s murder.

“But it’s worse than that,” said Dershowitz. “It’s irresponsible and unethical in not including material that favors the defendant.”

“This affidavit does not even make it to probable cause,” Dershowitz concluded. “everything in the affidavit is completely consistent with a defense of self-defense. Everything.”