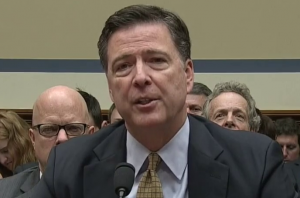 When quizzed by Republican Congressman Jason Chaffetz during his Congressional testimony Thursday, FBI Director James Comey declined to answer whether or not he would grant Hillary Clinton a security clearance given what he now knows about how she handled classified information.

“I don’t want to answer a hypothetical,” Comey responded, “The FBI has a robust process in which we adjudicate the suitability of people for employment in the bureau.”

Chaffetz tried rewording his question, asking instead about a generic person who did what Clinton did. “It would be a very important consideration in a suitability determination,” Comey admitted.

“You’re kind of making my point, Director,” Chaffetz said to intermittent laughter in the gallery. “The point being, because I injected the word ‘Hillary Clinton,’ you gave me a different answer.”

He then proceeded to list off Clinton’s security failings: “If I came up to you and said this person was extremely careless with classified information, the exposure to hostile actors, had used, despite warnings, created unnecessary burdens and exposure, if they said they had one device and you found out they had multiple devices, if there had been e-mail chains with somebody like Jake Sullivan asking for classification changes, you’re telling me the FBI would grant a security clearance to that person?”

“I’m not answering — I hope I’m giving a consistent answer,” Comey responded. “I’m not saying what the answer would be, I’m saying that would be a important consideration in a suitability determination for anybody.”

“Personally I just think that sounds a bit like a political answer because I can’t imagine that the FBI would grant security clearance to somebody with that fact pattern,” Chaffetz said to Comey.

“I say what I said before, it’s very hard to answer a hypothetical,” he replied.