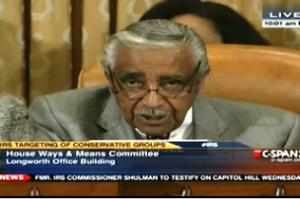 At face value, there shouldn’t be anything wrong with a Democratic member of Congress admonishing recently departed IRS acting commissioner Steven Miller for allowing agents to target conservative groups under his watch. But when that congressman is Rep. Charlie Rangel (D-NY), who was found guilty of 11 ethics violations, including neglecting to pay taxes on his Dominican Republic vacation villa in 2010, things gets a little more tricky.

Rangel was questioning Miller during Friday’s House Ways and Means Committee hearing when he came to the conclusion that the IRS had acted inappropriately when it actively targeted Tea Party and other conservative groups for audits. “This is wrong to abuse the tax system,” Rangel said, without any hint of irony. “This screams out for tax reform, does it not?”

“Regardless of whether Republicans or Democrats did something like this,” Rangel continued, “the outrage should still be there, is that not correct?” When Miller answered affirmatively, Rangel reminded him that his “integrity” is on the line, along with that of President Obama, the IRS and Congress. “People are losing confidence in how government–and I hope that you feel the same sense to find out what caused this, how it could happen, and help us to restore the confidence that Americans should have in their government.”

Rep. Rangel was ultimately censured by the House for his ethics violations in December 2010. Following the formal measure, Rangel spoke to Congress, saying, “I know in my heart I am not going to be judged by this Congress. I’ll be judged by my life in its entirety.”