John Boehner Bursts Into Tears While Standing Next to the Pope 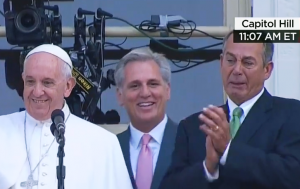 In a now-regular occurrence that no longer surprises anyone in Washington, Speaker John “Real Men Do Cry” Boehner burst into tears while standing next to Pope Francis on Thursday morning.

CNN captured the moment the tears started pouring out of the Ohio Republican’s eyes while he stood next to the pontiff on Capitol Hill.

Needless to say, many pondered whether or not the wet cheeks would happen beforehand:

What to expect from pope Francis’s address to Congress: how’s his English? will there be cheering? will Boehner cry? http://t.co/5uiw6DBOeX

Will John Boehner and Joe Biden both cry during the pope’s address to Congress? http://t.co/Yt9lORZ9SL pic.twitter.com/7Ssef3GVyK — The Atlantic (@TheAtlantic) September 24, 2015

The Pope just walked into the House Chamber & I’m pretty sure Boehner is gonna cry. I’m ok with that.

“Do you think he’s going to cry?” — @caitlinmacneal asking the most obvious question ahead of Boehner’s visit w/ the Pope

When they did, the proverbial floodgates were opened:

Boehner is SO doing the ugly cry next to the Pope. 😂 #PopeInDC — DuneMyThing (@Kris_Sacrebleu) September 24, 2015

Holy cow! I though I cried at everything! Boehner is making ugly cry face for standing next to Pope on balcony!

Boehner cried. I’d cry too if I was a Catholic Republican, and the Pope came all this way to tell me to care about the poor & the planet. — Chicago Man (@Iwanski) September 24, 2015

A) Pope Francis rules B) John Boehner trying not to cry behind him & then just having to let it out is adorable. Go ahead Boehner. Feels.